J. Michael Short
Pete Gonzales, a staple of SA's entertainment scene, was murdered outside his music club, 210 Kapone's. Friends and fans put together a memorial.

Teenagers dressed in black with neon-colored hair and studded belts lined up at 210 Kapone's a week ago to check out the sounds of the personal project from My Chemical Romance's rhythm guitarist.

Drums rattled, the bass pulsed and electric guitar riffs blasted out of the same club where, just three days earlier, a patron who was kicked out shot the club's owner — 45-year-old Pete Gonzales — in the back, killing him.

Standing in stark contrast to the lively night were two memorial wreaths — one with yellow flowers and the other red — placed on two chairs. Three candles sat watch at the base of the chairs, burning bright. A San Antonio police officer stood nearby, quietly keeping guard.

Arturo Alderete, who worked for Gonzales for three years at the Psycho Asylum, a haunted house just steps away from 210 Kapone's on East Houston Street, said his boss will always remain a legend in the Alamo City music scene.

"We're all going to miss him. He left a huge legacy, from Backstage Live to 210 Kapone's," Alderete said.

The club was Gonzales' latest venture, but it was just one in a long list of projects in which he played a key role, from Slinging Ink Tattoo Expo to the River City Bike Fest and South Texas Rock Fest.

Sylvia Fernandez, Gonzales' former girlfriend as well as business partner, worked with him on nearly all of his ventures and the couple had three children, a boy and twin girls. Gonzales also has a 28-year-old daughter who helps operate 210 Kapone's.

"It was amazing how everything unfolded," Fernandez said between deep breaths and occasional sobs, reminiscing about when they organized their first event in 2003, a motorcycle rally at Camargo Park.

But before rallies, events, bars and clubs, Gonzales and Fernandez made money in construction and highway mowing. Eventually, however, Gonzales wanted something other than state contracts and lucrative construction deals.

"And so the passion part came into play and Pete's passion was always motorcycles, music and tattoos," Fernandez explained.

Between 2003 and 2009, the couple formed Nikita Productions, which organized concerts and events: Slinging Ink Tattoo Fest, the now defunct River City Bike Fest, Salsa Fest and South Texas Rock Fest, among many others.

"Pete was an entrepreneur at heart," Fernandez said, while composing herself after tearing up.

But music was always a burning fire in Gonzales' soul and he was an avid concertgoer while growing up. And so in 2009, Gonzales and Fernandez found an old warehouse at the intersection of E. Houston and Cherry — just a block up the street from 210 Kapone's.

"The place was a dump," Fernandez said. "But Pete was a collector of memorabilia and from every concert we did, he'd have all this stuff and it was accumulating in our house. He was like, 'we can hang all this shit up and it would be bad ass.'"

About a month after their twin girls, now 5, were born, Backstage Live — now Alamo City Music Hall — opened its doors to the masses.

"That was a very successful grand opening and it started making the precedent for everything," Fernandez said. "We got busy with that and stopped doing so many events. This was easier."

By 2013, however, the couple split — on friendly terms — and Gonzales concentrated on Psycho Asylum, now one of SA's most popular haunted houses. The following year, Gonzales was ready to open up a new venue, which Fernandez said was his vision.

"He built that from the ground up. That place was just a shell. Backstage was a cosmetic, but 210 Kapone's was a full build-out," she said. "Unfortunately, that's where his life was taken."

According to a police report, Martinez rented a VIP room at the club on March 14 but Gonzales later kicked him out for creating a disturbance. Martinez left but quickly returned with a gun, shooting Gonzales in the back while the owner was dealing with other unruly patrons.

Vazquez allegedly pulled up in his car on E. Houston in front of 210 Kapone's, stepped out and fired three shots from a .380 caliber semi-automatic pistol, striking Gonzales in the back shoulder and elbow, according to police.

He was not responsive when paramedics showed up and he died at the hospital, records show.

Vazquez is a registered sex offender, according to the Texas Department of Public Safety. He was convicted of indecency with a 4-year-old child in 2003 and sentenced to seven years in prison. 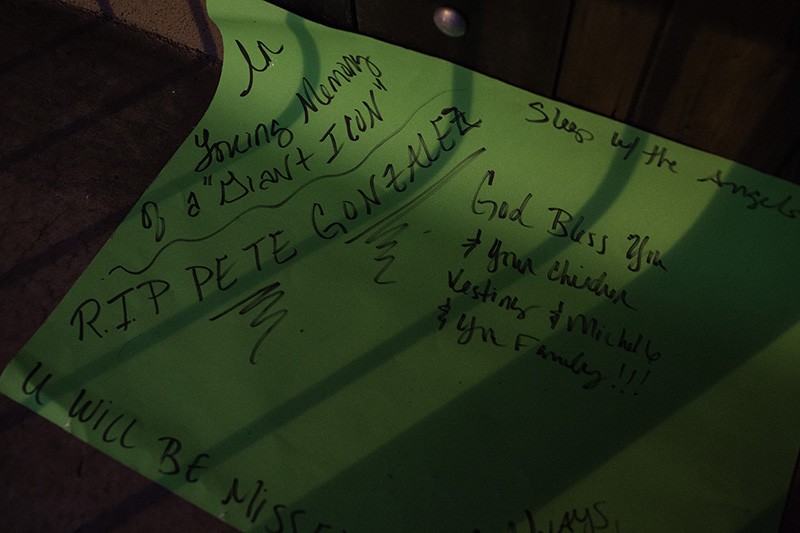 Juan Ramirez Jr., who worked with Gonzales at Psycho Asylum, said he last saw him a week before the shooting.

"I remember telling him I'll see you next week, and when are we going to start setting up the haunted house for this year," Ramirez said. "And he just laughed and smiled. Then we shook hands like always."

With Gonzales, a job wasn't just a job, though, Ramirez pointed out.

"He was taken from his family and the haunted house family. Yes, we worked for him but it didn't feel like work, it felt like a fun place and like you were working with family," Ramirez said.

While Gonzales is remembered for his entrepreneurial spirit and love of tattoos, motorcycles, haunted houses and music, he could also be gruff. But those who knew him fully accepted that side of him.

"When I first met this guy he was quite intimidating. He had that mean look," Alderete recalled.

Fernandez said sure Gonzales had his prickly side. He was prone to colorful language.

"He wasn't eloquent and polite when speaking. He used a lot of crazy words, but that was just him," she said.

The club is sure to stay in operation because Gonzales had partners running the show, including his eldest daughter. The future of other ventures are more up in the air, though those involved expect to stay open.

"Hopefully, we get to continue the haunted house and make him proud," Ramirez said.

Fernandez is barely getting used to talking about Gonzales in the past tense.

"He knew so many people and so many different communities, parts of towns, trades, just different people," she said. "He couldn't go somewhere without someone saying hello."'

His impact on the community was palpable from online posts to posts on the San Antonio Current website and Facebook page.

"Always worth the drive from out of town and always worth the money. You gain so much of an appreciation for music at a show and a lot of it goes to the venues and staff who let you live that experience," Amy C. Molina wrote. "He was a major contributing factor to the live music experience and to learn of his passing is simply heartbreaking."

Margie Marshall chimed in thusly: "Thank you for all you did for the SA community. Rest in peace My Dear Friend. It's obvious God has greater plans for you."

"Rest in peace Pete. No judgment here. You always took care of us. Never forgotten. We love you. Nobody's perfect," she wrote. "And you are yourself. That was never a show. It was you being you. Truly will be missed my friend. Thank you for everything you gave and did for us. Till we meet again."