The Republican governor's focus on fentanyl as he faces a tough reelection fight is understandable, but under his watch, the state has shown little appetite for fostering efforts to prevent overdose deaths. 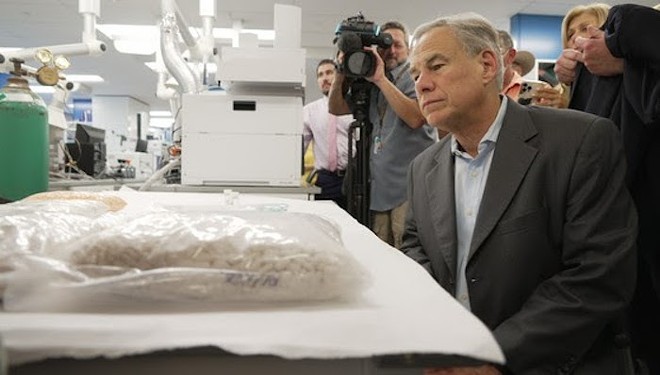 Office of the Governor
Gov. Greg Abbott looks at a bag of fentanyl during a photo op earlier this year.

Gov. Greg Abbott wants you to know that he's doing everything he can to stop the terrifying scourge of fentanyl.

The Republican governor's focus on fentanyl as he faces a tough reelection fight is understandable. Synthetic opiates, including fentanyl, were responsible for two-thirds of U.S. overdose deaths during the 12 months that ended this March, according to the Centers for Disease Control.

But here's the problem: Abbott's war on fentanyl has largely centered around his Operation Lone Star, a $4 billion program to step up arrests of migrants crossing the border. Meanwhile, under his watch, the state has shown little appetite for fostering efforts to prevent overdose deaths.

While Abbott's pricy border crackdown has grabbed plenty of headlines and appealed to immigration hardliners in the electorate, a recent report by the Cato Institute based on federal drug-apprehension data shows why it's misdirected.

More than 90% of fentanyl seizures occur at either legal crossing points or interior vehicle checkpoints, according to the libertarian think tank's report, and 86.3% of convicted traffickers of the drug last year were U.S. citizens.

In contrast, just 0.02% migrants apprehended by U.S. Customs and Border Protection that year for crossing illegally had any fentanyl in their possession.

While that data applies only to federal arrests, there's no evidence to suggest the state numbers would widely diverge. Just the same, Abbott and other Texas officials have trumpeted major victories in confiscating fentanyl along the border.

Multiple media investigations have since poked holes in those claims. In one of the most glaring examples, Abbott last year lauded Operation Lone Star for seizing 887 pounds of fentanyl, but a review by ProPublica and the Texas Tribune showed that less than 20% of that total was confiscated in counties involved in Abbott's border initiative.

Taken together, the federal statistics suggest that the most effective way to mitigate the fentanyl crisis isn't scapegoating migrants but working to stop overdoses, wrote David J. Bier, the author of the Cato study.

"Reducing deaths requires figuring out the cause, not jumping to blame a group that is not responsible," according to Bier. "Instead of attacking immigrants, policymakers should focus on effective solutions that help people at risk of a fentanyl overdose."

And, according to critics, Texas under Abbott's leadership has also failed miserably on that front.

In one of the most glaring examples, a state program that helps local police and health departments obtain Narcan, an easy-to-use medication that can save the lives of overdose victims by blocking the effect of opiates, went unfunded for most of this year.

Operated out of the UT Health San Antonio School of Nursing, the program relies on federal grants. When that funding ran out in January amid the national rise in overdoses, state officials let it languish until a new federal funding cycle started in September.

Supporters of the program have argued that the state should be putting its own money into the program given its potential to curtail overdoses amid the crisis.

"Not a day goes by that I don't receive a desperate request for low or no-cost nasal naloxone from health departments, first responders, health systems, community pharmacies, you name it," Joy Alonzo, co-chair of the Opioid Task Force at Texas A&M University in College Station, told the Texas Tribune in August. "All say the same thing, there aren't any low or no-cost options, and their patients can't pay $135 for a naloxone rescue kit."

What's more, another significant tool in combating fentanyl overdoses is outlawed by the Lone Star State.

Despite rising overdose deaths in some of its largest cities, Texas is among the nearly half of U.S. states where fentanyl test strips remain illegal.

The easy-to-use strips allow addicts to check whether the drugs they're using contain the synthetic opiate, potentially staving off deadly outcomes.

The state ban hasn't stopped harm-reduction groups from distributing the strips to people at risk of overdose. San Antonio's Bexar Area Harm Reduction Coalition, for example, continues to pass them out to its clients.

However, BAHRC founder and board member Curt Harrell said their current classification as illegal drug paraphernalia makes them hard to come by, and that raises the risk to users on the street.

A bill to make the test strips legal made it out of a House committee during the last session of the Texas Legislature, but it failed to advance in the Republican-controlled body.

"One of the things I'd like our illustrious governor to understand is that these strips don't have fentanyl in them, they detect fentanyl," Harrell said.

However, there's little reason to believe the ambivalence of Texas' leadership will change. Abbott's office declined to answer an inquiry from the Current about the part Narcan and test strips can play in reducing fentanyl deaths.