22 Republican governors expressed their disapproval of the student debt cancellation in a letter to Joe Biden. 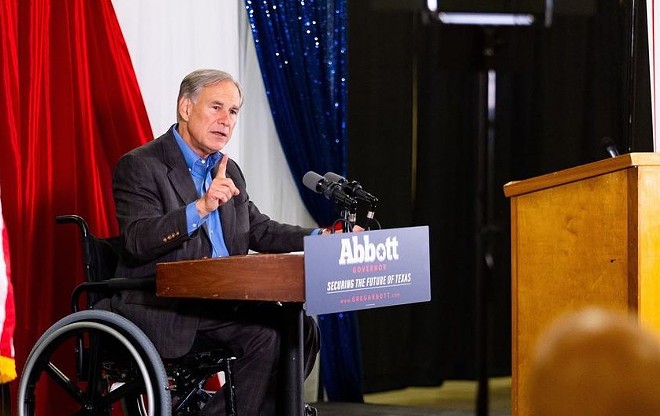 Instagram / abbottcampaign
Gov. Greg Abbott wags a finger at a July campaign appearance in Fort Stockton.
Texas Gov. Greg Abbott, along with 21 other Republican governors, signed a letter Monday asking President Joe Biden not to go through with his student loan forgiveness plan.

Biden in late August announced a plan to cancel up to $20,000 in federal student loan debt.

"As governors, we support making higher education more affordable and accessible for students in our states, but we fundamentally oppose your plan to force American taxpayers to pay off the student loan debt of an elite few," the letter begins.

"Borrowers with the most debt, such as $50,000 or more, almost exclusively have graduate degrees, meaning hourly workers will pay off the master's and doctorate degrees of high salaried lawyers, doctors, and professors," the letter continues.

The letter goes on to claim that college graduates with student loans are basically irresponsible elitists looking for a handout.


"College may not be the right decision for every American, but for the students who took out loans, it was their decision: able adults and willing borrowers who knowingly agreed to the terms of the loan and consented to taking on debt in exchange for taking classes. A high-cost degree is not the key to unlocking the American Dream — hard work and personal responsibility is," the letter states.


It's a hard line that Republicans never seem to take when businesses need bailouts.

In 2015, Abbott and the GOP-controlled Texas Legislature approved a 25% reduction in the state business franchise tax — a total the governor trumpeted as being worth
$2.56 billion over a two-year period. Last year, he signed a law exempting forgiven Paycheck Protection Program loans from being subject to the Texas franchise tax.


Further, Abbott seemed to have no problem using federal pandemic bailout money to fund one his pet projects.

As of May, the governor had funneled $1 billion in federal COVID-19 relief funds into his hardline border security mission, according to the Washington Post. A U.S. government watchdog is now reviewing whether that money was misspent, the Post also reports.

"Everyone knows someone that's struggling post pandemic," Cardona told NPR. "And, you know, if we help folks in the communities so that they — reduce the chances of them going into default, everybody wins. It helps the economy."

A version of this story first appeared in the Riverfront Times, an affiliated publication. San Antonio Current Editor-in-Chief Sanford Nowlin also contributed to this report.