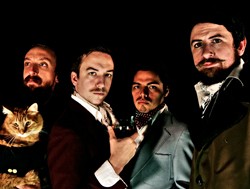 
“San Antonio is a shithole” reads a particularly inflammatory blog that’s been the primary focus of MySpace music circles as of late. Posted by a member of Great Northern Guns, the three-part blog slams the city for being ignorant and insular, then launches into a rant about a music scene with “a turnover rate like the circus” due to kingpin promoters who monopolize the scene. But they have a point. At what point do bands stop accepting their fate? The Guns have subsequently vowed never to play SA again, and their insults have predictably incited a flurry of rejoinders. A circulating flyer reads “Great Northern Guns hates San Antonio and they hate you too! Come help us beat the shit out of them at their last show ever in the 210!” Publicity stunt? Maybe. Hilarious? Definitely. 10pm, Limelight, 2718 N. St. Mary’s, myspace.com/greatnorthernguns.