The nine pages of blue ink on white lined paper show how the governor prepared his remarks for a news conference May 25, the day after the shooting — presumably based on information being given to him. 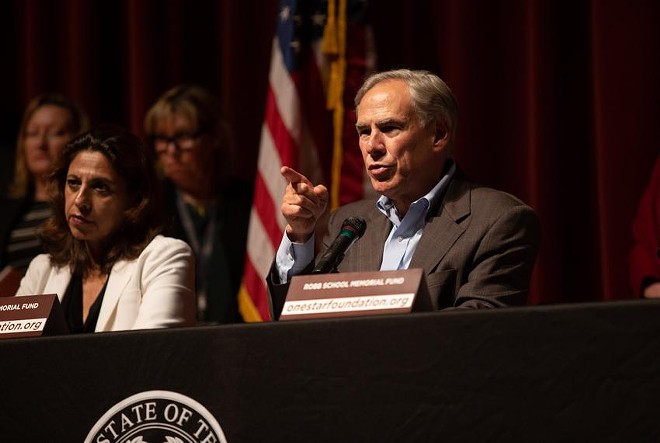 Texas Tribune / Evan L'Roy
Gov. Greg Abbott speaks during a press conference at the Uvalde High School on May 27, 2022. He addressed the response to the recent school shooting and emphasized the need to respond to mental health crises.
Handwritten notes Gov. Greg Abbott made following the massacre at Robb Elementary School in Uvalde raise new questions about who allegedly “misled” the governor about the widely criticized police response to the shooting, causing him to initially relay inaccurate information to the public that he would later retract.

The nine pages of blue ink on white lined paper, first published by the Houston television station KTRK, show how Abbott prepared his remarks for a news conference May 25, the day after the shooting — presumably based on information being given to him. Abbott said Uvalde Consolidated Independent School District police officers had “engaged with the gunman” outside the school before the gunman was able to enter through a back door.

But that turned out to be false.

The next day, a Department of Public Safety commander said the gunman went into the school unobstructed by any police. Abbott, in turn, said he had taken handwritten notes based on the details law enforcement and other officials had told him, which are what he used to prepare his public statements about the incident. He added that he was “livid” about being “misled.”


Who exactly gave Abbott false information, however, remains a mystery. Abbott last week declined to identify the culprits, saying only they were “public officials.”

Uvalde CISD police Chief Pete Arredondo told the Texas Tribune this week that he was not the source. Arredondo said after he heard Abbott make the false statement that the shooter had been confronted outside the school, he asked DPS officials, whom he declined to identify, why state leaders had been given inaccurate information.

Abbott’s notes do not indicate who told him police confronted the gunman outside. Abbott wrote the word “mayor” at the top of the document. Uvalde Mayor Steve McLaughlin declined to answer questions about what he discussed with the governor before the May 25 news conference. DPS also declined to comment.

Since Abbott on May 25 praised the “amazing courage” of police and said the death toll of 21 students and teachers “could have been worse,” a more complicated picture of the law enforcement response to the shooting has emerged.


Despite being the school district police, Arredondo said he and his officers did not have keys to open the doors to the adjoining classrooms where the shooter carried out the massacre. More than 40 minutes passed before police were able to find a key that worked, enter the rooms and kill the gunman.

Arredondo is the only police officer who responded to the shooting to offer a public first-person account of his actions. Other agencies who responded — including the U.S. Border Patrol, Uvalde Police Department and Uvalde County Sheriff’s Office — declined to answer questions about their officers’ conduct.