Michael Marks
Sabah Al-Dehaisy, a refugee in SA, is trying to work again as a veterinarian.

The 48-year-old Iraq native worked as a large animal veterinarian for over 15 years. In that time he delivered countless cows, goats, horses, mules and other animals.

"Being a veterinarian is a good job. I liked it all, but I liked the babies the most," Al-Dehaisy told the San Antonio Current. "I miss it."

Seven years after applying, Al-Dehaisy received approval last year to resettle in the United States as a refugee. But the opportunity came with a sacrifice: He would need years of additional training to practice veterinary medicine in the U.S., despite nearly a decade of veterinary school and another 15 years of experience in Iraq.

He's far from alone. In the U.S., barriers such as equivalency standards, additional licensing and learning a new language stand between skilled refugees and a job in their chosen profession. Many turn to minimum wage jobs to stay afloat.

"It's really difficult for [refugees] who are highly educated to find work in their fields," said Margaret Constantino, director of the Center for Refugee Services, a San Antonio nonprofit. "They can get back into their fields, but it usually takes them several years and it's very expensive."

The problem is particularly pronounced in Texas, which led the nation in refugee resettlements over the past three years — including 2,500 in San Antonio.

The president decides the number of refugees allowed to resettle in the U.S. each year, in consultation with Congress, nonprofits and various federal agencies. President Obama set the cap at 70,000 people for 2015, divvied up unevenly between various regions of the world. Most come from Africa and East Asia.

Once they arrive, refugees who were doctors, engineers, lawyers and teachers with years of experience back home start from scratch in the United States.

Obtaining the necessary licenses and degrees to work in the United States can be time consuming, challenging and expensive — particularly for those with little grasp of English. But experts say that many refugees, who have typically fled intense danger and tragedy, are undaunted by the challenge.

"Individuals who are highly educated and have that advanced ... certification, it will take them a little bit of time to gain their footing in the U.S," said Amanda Posson, vice president of programs at the nonprofit Refugee Services of Texas in Austin. "But overall we see consistently that they're all ... survivors."

Al-Dehaisy looks like an archaeology professor dressed for the field. Each time I met him he wore the same blue, long-sleeved button-down shirt with a Samsung logo and tan cargo pants. His moustache is neatly trimmed, his wristwatch's faux-leather band strapped tightly to his left wrist.

He likes San Antonio because the heat reminds him of his hometown, Baghdad. He is quiet and analytical, unmarried, quick to admit when he doesn't know a word in English but even faster to ask what it means.

After completing a five-year veterinary degree program at the University of Baghdad, Al-Dehaisy served two compulsory years in the Iraqi military, from 1989 to 1991. Although Iraq invaded Kuwait during his service, he didn't see any action. He spent most of his time tending to mules in the country's mountainous northern region.

Al-Dehaisy first applied for resettlement in the U.S. as a refugee in 2007 — a rigorous process that's the ultimate exercise in dotting I's and crossing T's. The smallest mistake on a form can send you to the back of the line for the few slots allocated each year, he said.

To qualify as a refugee, one must face "persecution or a well-founded fear of persecution on account of race, religion, nationality, membership in a particular social group, or political opinion," according to the federal Office of Refugee Resettlement.

Al-Dehaisy qualified because he worked with the Army as an interpreter during the U.S. invasion of Iraq in the mid-2000s.

As an interpreter, Al-Dehaisy was a prime target for militia violence. That came to a head in November 2007 in what could have easily been a deadly encounter.

While on leave in Baghdad, a fellow interpreter pointed Al-Dehaisy out to a car of Shi'a militia members. One of them hopped out of the car and shot him three times in the back with a pistol. After he fell, he was shot twice more, once in each leg. Al-Dehaisy said he wasn't sure if the same man was responsible for every shot, or if a rooftop sniper hit him in the legs.

One of the shots shattered his tibia, which is now held together with a titanium plate. His left leg is a few centimeters shorter than his right because of the surgery. Walking can be painful; running is out of the question. His gait, along with five nickel-sized scars, is a reminder of his home's turmoil.

"I live in the U.S. because I can't go back my country. My country has too many problems," Al-Dehaisy said. "There's too much hurt in Baghdad."

But Al-Dehaisy was lucky — he already had a support system in San Antonio, where he resettled in September 2014. His brother and two sisters live here and Iraqis made up the largest refugee contingent in Bexar County in 2014. While waiting to hear on his application, he went back to school and earned additional certifications, conducting experiments in obstetrics and in vitro fertilization. 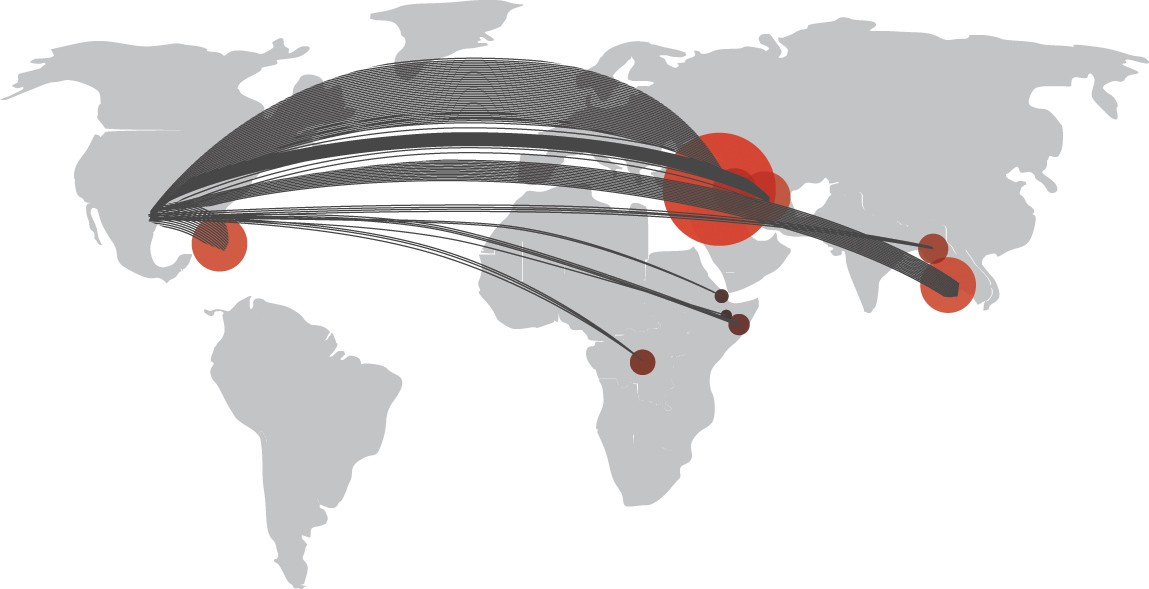 Source: Texas Department Of State Health Services
This chart shows the distribution of refugees who came to San Antonio in 2014 by country.

No Time To Waste

Nonprofit agencies support new refugees by helping them find housing, navigate public assistance programs and sometimes offering cash. But that aid, backed by state and federal resources, is limited and typically dries up after six to eight months. Earning income as quickly as possible becomes the backbone of successful resettlement.

"U.S. resettlement programs are built on refugees entering employment and becoming as self-sufficient as possible," Posson said. "In order for that machine to work, refugees need to be getting employed really quickly."

That often means taking the first job that comes along, regardless of how much it pays or if it has nothing to do with their background.

Flyers for work opportunities dot the bulletin board at the Center for Refugee Services, a drab brick building just outside Loop 410 on Wurzbach Road. Much of San Antonio's refugee community clusters in apartment complexes along this stretch of Wurzbach.

The center is a hub for the SA refugee community. Constantino and her staff of volunteers offer the gamut from ESL classes, food and clothing and help with cutting through red tape tied to government programs.

The center depends on private donations and grants. Many refugees who go there have exhausted their federal benefits.

Inside, the center bubbles with activity. Some refugees tap away at a bank of computers, while others filter in and out to drop off a form or look at the bulletin board. Young high-pitched voices with perfect American accents careen into the lobby from a back room where kids play.

The jobs advertised at the center are unskilled low-wage positions. They're for hotel housekeepers, dishwashers, food runners and movers. None pay more than $10 per hour; some state plainly that they start at minimum wage.

"[Refugees] usually end up taking those low-wage entry level jobs that you and I would not necessarily want, but they have to pay the rent somehow," Constantino said. "They have to survive. Sometimes those are the only jobs they can get in the beginning."

Some employers habitually hire refugees. Nino's Fresh Cut Fruit and Vegetables is one of them.

Juan Nino, a Mexican immigrant himself, started the business in 1991 selling fresh produce out of his 1983 Ford F-250. Now, at the San Antonio Produce Terminal on the Westside, he employs over 120 people — about a third are refugees — to chop and package fruits and vegetables for sale to caterers and restaurants.

Nino said he likes to hire refugees because they tend to be dependable and have a strong work ethic. Although few speak English, they catch on to the work quickly and stick around longer than his local hires.

Path To The Goal

Al-Dehaisy is not currently working. He relies on savings from his vet and translating days and gets support from his brother, who works in telecommunications. He shares an apartment with his siblings.

Landing a gig has crossed his mind, but he's more focused on his long-term goal of working as a veterinarian. Lately, he's spent most of his time at the Center for Refugee Services, using the center's computer lab to apply for doctoral programs in animal science.

To work as a vet again, Al-Dehaisy will have to earn a Doctor of Veterinary Medicine degree. It's at least another four years of school. He's already started the application process to Texas Tech University in Lubbock, nearly 400 miles north from his family in San Antonio.

"I would go to Boston, Mississippi, it does not matter," he said. "In the U.S., the veterinary field is hard. Not everybody can do it."

But he's not bitter about the extra time, effort and money he'll have to expend in order to meet his goal. He remains undeterred, even optimistic. There's no lack of determination in him.

"Now, I think I'm in a good path to my goal. But I am walking step by step," Al-Dehaisy said. "I hope to work in this field. And I hope to be married and have a good family. Not much."

Texas leads the nation in fires, explosions and other serious incidents from natural gas pipelines