The project would add to the flurry of housing developments underway in Tobin Hill, making it the hottest submarket in central San Antonio. 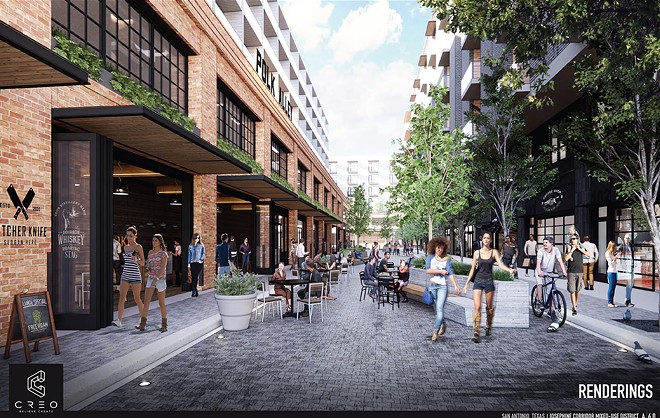 Polk Street, between West Josephine and East Grayson streets, would be turned into a pedestrian space in Jake Harris’ mixed-use development.
North of downtown, California developer Jake Harris, who has been establishing a strong presence in San Antonio through his company Harris Bay in recent years, is planning to build a 1,000-unit, mixed-use apartment complex on West Josephine Street that would also touch the St. Mary’s Strip.

It would add to the flurry of housing developments that are either in the planning stage or under construction — roughly 2,500 new apartments — in Tobin Hill, making this area the hottest submarket in the downtown area, and perhaps all of San Antonio.

The Harris Bay project would consist of four mixed-use buildings on roughly 5.7 acres with 70,000 square feet of retail space, and 1,075 parking spaces. One of the buildings would abut Nathaniel Hawthorne Academy. Another would be built on West Grayson, across from The Lonesome Rose, and next to Polk Street, which Harris envisions as being closed to traffic and turned into a pedestrian area lined with shops and restaurants.

Harris said this stretch of West Josephine and West Grayson, which connect the Pearl and North St. Mary’s Street, is ripe for development more in tune with walkable, urban neighborhoods. He sees this one as having smaller-sized units—mostly studios and one-bedrooms—with rents lower than the ones found at the Pearl.

“This site specifically we can start designing for humans and not for cars,” Harris said. “I don’t think cars are going away, so we do want to make sure we provide the appropriate amount of parking. But we believe some of the people who live there may not have cars, or they do have cars (but) they may not drive them during the week.”

He would be joining other developments under construction, including the 259-unit Josephine, co-developed by The Lynd Co. and Opportunity Home San Antonio, currently under construction at 120 W. Josephine St. (in front of Hawthorne, and practically next door to Harris’ project), and the 338-unit Tin Top Flats at The Creamery by Embrey Partners (behind Hawthorne), among others (see below).

Harris doesn’t yet know if he’ll pursue subsidies from the city or county, which would likely determine whether below-market-rate units (sometimes referred to as affordable) are included. For now they’d be market-rate, but priced more for people who work in offices at Pearl and the Broadway corridor, he said. There could also be some for-sale units, he said.

“We just think that it’s the right time and opportunity to continue the development (in the area), and create lots of walkable amenities for the neighborhood, and really start to connect Tobin Hill to the Pearl,” Harris said. 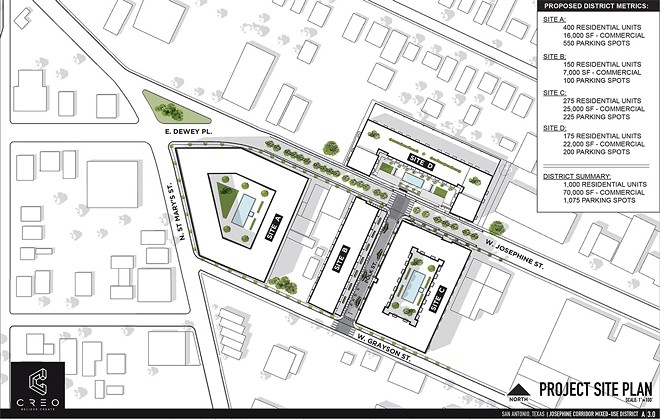 A 1,000-unit development is being proposed for West Josephine Street at North St. Mary’s Street by developer Jake Harris.

Harris has nearly 20 parcels from various owners under contract—a hodgepodge of small warehouses, retail showrooms, and a few small houses—and will complete the purchases assuming the Zoning Commission approves the project. Currently, the parcels consist of various commercial designations; Harris and his team are looking to have them rezoned as IDZ-3 (infill development zone), which would allow for a bar or tavern, but not a nightclub.

It will also require approval from the Planning Commission. The plan is to go before both Zoning and Planning commissions by the end of the year, said Patrick Christensen, Harris’ development consultant.

Harris said the total cost, as it stands today, is between $250-$350 million. He added with the rising cost of construction and interest rates, the price tag is likely to increase by the time he breaks ground in late 2023 or early 2024.

In recent weeks, members of Harris’ development team have met with community groups, including the Tobin Hill Community Association.

The response? Depends on who you ask. While there are still more meetings to be scheduled, some welcome the level of density Harris is proposing, while others think it should be scaled back. Same for the height of the buildings; Harris described a development with varying heights, perhaps three stories in some places, and up to 10 stories in other areas.

Harris’ team is tweaking some of the design as they receive feedback from nearby residents, Christensen said.

If built, it would be the largest single development in terms of number of apartments, but Harris said this one has less density (less units per acre) as it’s spread over several acres compared to others built in the downtown area.

Parking is another concern for Tobin Hill residents and businesses (in case you haven’t heard).

The area, in particular the St. Mary’s Strip, is in the middle of a parking crisis, which has made headlines in recent weeks. On and around North St. Mary’s, Tobin Hill residents and businesses, as well as District 1 Councilman Mario Bravo, continue to work on the area’s parking issues. All of this as construction on North St. Mary’s continues to drag on—to the frustration of all.

The timeline of Harris’ development and the parking situation don’t seem to be on a collision course. It typically takes two years to complete a large-scale multifamily development. Should Harris break ground on the first phase in late 2023, for example, it wouldn’t be completed until late 2025. By that time, the North St. Mary’s construction is expected to be completed, as well as a parking solution for the area.

Still, that parking solution should factor in developments such as Harris’, and others that are in the pipeline, especially if they are going to add to the retail options in Tobin Hill, said Alfonso Robalin, president of the Tobin Hill Community Association.

“We need to get the parking situation figured out in the neighborhood regardless (of incoming development),” Robalin said. “These retail vendors who are coming in, we don’t know who they are just yet.”

Harris envisions coffee shops and restaurants on the ground floor to complement the restaurants and nightclubs that comprise the St. Mary’s Strip, as well as the higher-end restaurants at the Pearl. He loves the idea of a small-scale grocery store, as do Tobin Hill residents.

“We can make the space available to [H-E-B],” Harris said. “If they think they have the density [and] it makes sense for their business model, we’d love to have them.”

He anticipates the development would include some public parking, as well.

Members of the Tobin Hill Community Association also continue to discuss whether to close Polk Street, which Harris wants to turn into a pedestrian way with tables and chairs set up on the street. 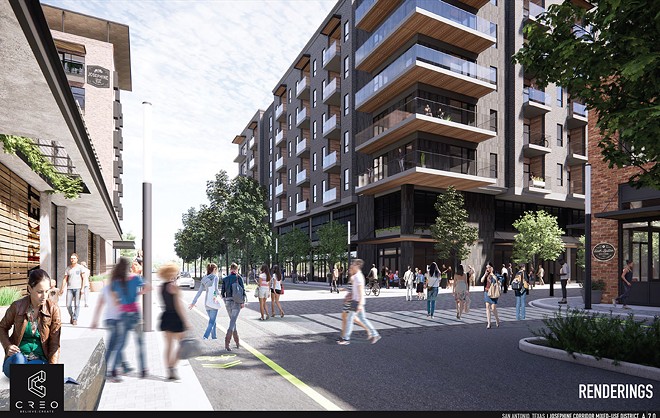 Robalin said another concern is traffic, and the ingress and egress of the area to and from Tobin Hill and U.S. 281, given the abundance of new housing construction underway.

And then there’s the issue of some of the structures currently on the properties, including unique retail buildings such as the Texas Neon Advertising Company.

Some members of the Tobin Hill Community Association want to save some of the facades and incorporate them into the development.

Frederica Kushner of the Tobin Hill Community Association believes “the Texas Neon sign building, the Handy Andy bakery building, the Shearer florist shop from the 1920s, and the Conoco gas station from the 1930s should get better treatment than demolition, since they contribute to the look and feel of the neighborhood,” she said in an email while expressing her personal views, and not those of the community association or it historic preservation subcommittee.

“Put me in the camp of somebody who is a YIMBY,” Carey said, referring to the term “Yes In My Backyard,” a view that welcomes development as opposed to people who oppose new development for various reasons. “I love seeing new stuff built. I love density that’s mixed-use in character. I think bringing new people into the neighborhood on the whole is going to be a good thing.”

He described projects like the one Harris is proposing as the inevitable outgrowth of the Pearl, and one that could eventually solve some of the strife between Strip business owners and Tobin Hill residents who think those businesses are too bar- and club-centric

“I’ve always taken the position about Tobin Hill and the Strip that the market is going to solve a lot of those problems over time. I think you will see more restaurants and cafes and day-time places, and just conventional retail,” Carey said. 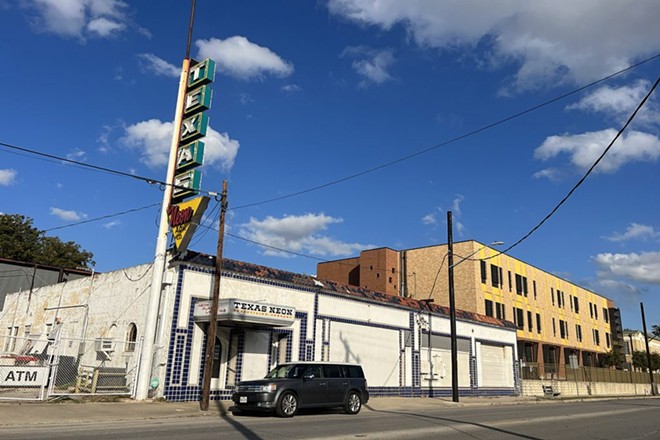 Ben Olivo
The Texas Neon Advertising Company is located on the 200 block of West Josephine Street.

There are other projects in the works aside from the 259-unit Josephine and 338-unit Tin Top Flats at The Creamery.

Houston developer Urban Genesis is planning to build on at least three properties on or near North St. Mary’s.

Earlier this year, Matt Shafiezadeh, a principal with Urban Genesis, said it planned to add around 200 units to the area.

“We really like the Tobin Hill neighborhood, and we’d in fact be interested in acquiring more properties, so long as they’re large enough,” Shafiezadeh told the Heron. “We view it as a highly-amenitized location that can access the Pearl district but also the jobs downtown. I personally love the St. Mary’s Strip.”

» Sabot Development of Austin is planning a 299-unit, 10-story apartment tower called Mira on the square block bound by East Euclid, East Locust, East Elmira and East Myrtle streets. It will have 12,000 square feet of retail.

This analysis does not include townhome developments.

“San Antonio is probably one of the best cities for doing projects and developments the entire country over,” he said, “and I’ll continue to shout that from the rooftops until people tell me to stop, I guess.”

Heron Editor Ben Olivo has been writing about downtown San Antonio since 2008, first for mySA.com, then for the San Antonio Express-News. He co-founded the Heron in 2018, and can be reached at (210) 421-3932 | [email protected] | @rbolivo on Twitter

This story was originally published by the San Antonio Heron, a nonprofit news organization dedicated to informing its readers about the changes to downtown and the surrounding communities.