Wikimedia Commons / Flcelloguy
A pump jack operates in rural Texas.
The Trump administration's proposed rollback of methane restrictions for the oil industry could have air-quality implications for thousands of Bexar County residents, according to data from the Environmental Defense Fund.

Bexar County is home to 2,013 oil and gas wells, according to the EDF's methane mapping tool, an online resource that shows the location of every active U.S. well. That means some 19,000 Bexar residents are located within half a mile of an active well and are considered vulnerable to airborne effects from methane.

Methane releases often include benzene and volatile organic compounds that can cause health problems and contribute to ground-level ozone, according to health experts.

“I think one of the things that’s especially striking in Texas is just how many people live within close proximately of oil and gas wells,” EDF attorney Rosalie Winn told Austin public radio station KUT. “We found that, all together, 2.5 million people in Texas live within a half a mile of an active oil and gas well.”

Of the Bexar County total, 15,000 are people of color, and 3,400 live below the poverty line. The data also shows that 1,700 are children under the age of 5 and 1,800 are people over the age of 65 — both considered vulnerable populations for methane exposure. 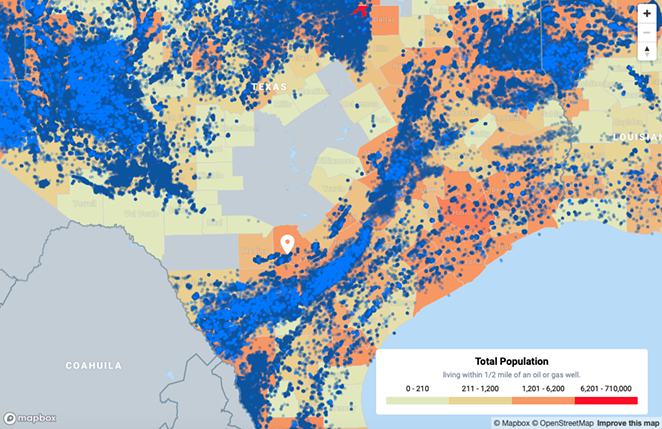 Screen Capture / Environmental Defense Fund
Under the Trump rollback, methane emissions in Bexar County would rise from 4,964 metric tons in 2017 to 8,441 metric tons in 2025, an increase of more than 70%.

Because of its heat-trapping properties, methane also has at least 30 times the global warming impact of carbon dioxide on a pound-per-pound basis, according to a recent Princeton University study.

The Environmental Protection Agency is accepting public comment until December 17 on the proposed rule change.