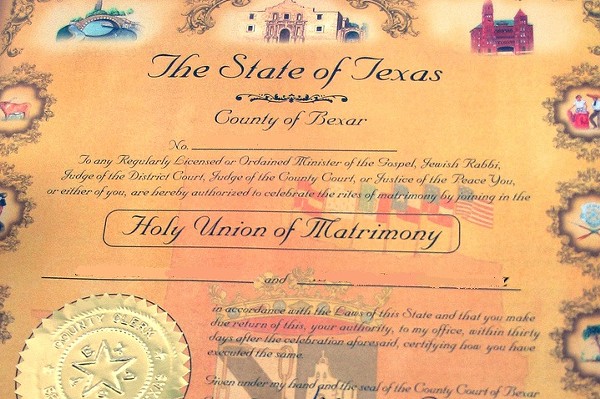 Pending the Supreme Court ruling on same-sex marriage, here’s some facts you should know about obtaining a marriage license in Bexar County.

The marriage license department for Bexar County is located on the 1st floor of Paul Elizondo Tower at 101 W. Nueva St. and will be open from 8 am to 5 pm Monday through Friday.

However, Bexar County Clerk Gerard Rickhoff says his office will begin to grant licenses within 30 minutes of a ruling and he’ll stay open after hours if he needs to.

Both applicants will need proof of age and identity by birth certificate, license, or state-issued document. Additionally, the social security number will be required of each applicant.

The new-and-improved marriage license will cost $81 payable in cash only. The Bexar County license now will be “de-gendered,” or rather does not require those being married to identify themselves as male or female, even though the state’s application still does.

Traditionally, there is a 72-hour waiting period to be wed, but on the day of the decision and in the weeks to follow, the county will have judges in the building willing and ready to waive the wait.

For any additional information, see the Bexar County marriage license checklist, or call (210) 335-2223.

In anticipation of a ruling by the U.S. Supreme Court to overturn same-sex marriage bands, Unity Church of San Antonio is planning a "Freedom To Say I Do" wedding event where several same-sex couples may be married. Rev. Linda Martella-Whitsett is prepared to officiate marriages in a series of small ceremonies all day long, from 9:30 am to 5 pm on July 4. For more on the church's wedding day plans, visit their site unityofsa.org.

Not only has Rickhoff had a hand change for Bexar County, but has set a letter to Commissioner Kirk Cole urging the Department of State Health Services to “de-gender” the state-issued marriage licenses. The letter was also signed by the Travis and Dallas County clerks, but not the clerk of Houston's Harris County.