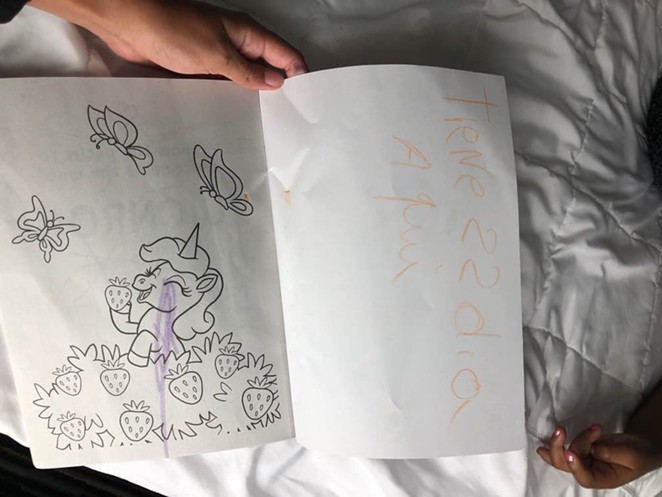 Twitter/RAICESTEXAS
The mother of a Hatian family scheduled for deportation showed this crayon message to a RAICES attorney through the window of a hotel in which she is being held.
Federal agents are holding at least one immigrant family at a San Antonio Homewood Suites hotel despite an earlier pledge from Hilton, Homewood's owner, that it wouldn't let federal agents detain immigrants at its properties.

According to the immigration justice organization RAICES, U.S. Immigration and Customs Enforcement agents have detained a family of four from Haiti inside the hotel near San Antonio International Airport for more than three weeks. They could be deported at any time.

RAICES attorney Krystle Cartagena, who represents the family, said their three-year-old daughter is has tested positive for COVID-19 and is suffering with fever and chest pains. However, ICE has prevented the girl from accessing medical care.

"It's incredibly disappointing that [Hilton] has a public statement saying, 'Our hotels are not supposed to be detention center,' and here we can confirm that they have families there," Cartagena said. "They think no one is looking."
In an emailed statement, ICE confirmed that it's holding individuals in custody at a San Antonio hotel while they're "awaiting travel."

"ICE has long utilized hotels to temporarily house immigrants on an as-needed basis," the statement said. "We can also confirm that one individual being housed at the hotel recently tested positive for COVID-19, has been isolated, and is being monitored by medical professionals. Everyone at the hotel is seen daily by a medical professional and has access to their legal counsel on file.”

The family was ordered to be deported on June 23, but as of today are still in the Hilton — either due to the public health situation in their native Haiti or their own health situation, the attorney says.

RAICES's path to finding the family was littered with roadblocks. After crossing the U.S.-Mexico border at the beginning of June, the family was detained and transported to the hotel.


According to Cartagena, the father of the family's sister, who lives in Florida, was ready to act as the family's sponsor. She'd spent weeks seeking legal representation for the family, but to no avail.


The father only figured out the name and address of the hotel he and his family are being held in when he found a brochure in a trash can. He got the information to his sister, who called a RAICES hotline.

Cartagena called one of family's rooms Tuesday, but she believes the person who picked up the phone was an ICE agent.

"He said, 'I have to end the call. I can't give you any information. You shouldn't be calling this number.' [It was] very cryptic and just needlessly shady," he said.

An hour later, the phone number Cartagena called had been disconnected.

So on Wednesday, with few other options, Cartagena rallied a group of activists and went to the hotel herself.

She was once again prevented from speaking to the family, but eventually figured out what room the wife and daughter were staying in when the wife came to the window of her room and began to wave.

In response, the attorney took one of the activists' signs and wrote a message on the back: "I am your attorney. ICE won't let me talk to you. What is your room number?"


The mother held up pages from a coloring book with information in response. One of the pages included a note in French written in orange crayon that read "Tiene 22 dia Aqui," or "We have been here 22 days."


While Cartagena spoke to hotel representatives at the front desk, activists went upstairs, found the room, started knocking and successfully pressured officers stationed there to let Cartagena finally meet with the family.

"It took police, protesters and six hours of refusing to leave before I could speak with clients," Cartagena said. "We literally had to have protesters at every exit of the hotel in case they tried to go to the airport before I had the chance to speak to them."


'Welcoming Places for All'


The federal government's practice of holding immigrant families at hotels,
often prior to moving families to dedicated detentions center or deporting them stretches back decades, according to immigration activists. But this practice has become a source of controversy over the past year.


After Donald Trump suggested that widespread ICE raids were imminent in June 2019, a group of progressive organizations including Daily Kos and the National Immigrant Justice Center organized to pressure major hotel chains to stop cooperating with ICE.

A petition demanding the hotel chains "refuse to let ICE use their properties as jails for immigrants" garnered more than 80,000 signatures that summer.

In response, a number of major national hotel chains — including Hilton, which operates Homewood Suites — announced that they would decline ICE requests to house immigrants in their facilities.

"Our hotels are intended to be welcoming places for all," Hilton wrote in a statement to the travel website Skift last July. "They are not designed to be used as detention centers, and we reject the idea of using them for this purpose.”

At Homewood Suites' airport location, however, there appeared to be a disconnect.

Cartagena said that a hotel representative told her on Wednesday that it has rented multiple rooms to ICE. However, the representative subsequently walked that statement back, and it's unclear at the moment how many families are being detained at the hotel.


On Wednesday evening, a front desk operator at the Hilton told the Current that the hotel was "looking into the matter" and provided no further detail.

Living conditions for the family at the hotel are difficult at best, according to Cartagena. The family's father has been allowed one phone call per day since arriving and is only allowed to leave his room once per day — often accompanied by guards.

RAICES is encouraging supporters to call the hotel and demand they it cease cooperating with ICE. It's also asking people call on the agency to release the family.

Under Centers for Disease Control guidelines instituted in March, any person entering the country without proper authorization can be deported without due process even if they are claiming asylum like the family in the hotel.

The CDC and the Trump administration have said that the law is designed to prevent the spread of the coronavirus, even though cases of COVID-19 have surged in federal immigrant detention facilities.

Immigration attorneys such as Cartagena say the new guidelines are a guise under which the U.S. government can deport legitimate asylum seekers without due process.

"It's just incredibly shameful," she said. "To circumvent a process that is already rigged against immigrants is ... incredibly disappointing."

The family's future in the U.S. is under grave threat. Cartagena said ICE has already tried to deport the family twice despite telling the father's sister that they would be released to her care in Florida after they quarantined for 14 days.


Now, with Haiti reopened to international travel, the attorney is working on communicating with ICE that the family deserves a credible fear interview — a first step in the asylum process.


"It took the stars aligning — finding trash, finding a hotline number — to find these clients," Cartagena said. "Otherwise they would have just been hastily deported without any due process."

It remains to be seen whether that due process will actually take place.