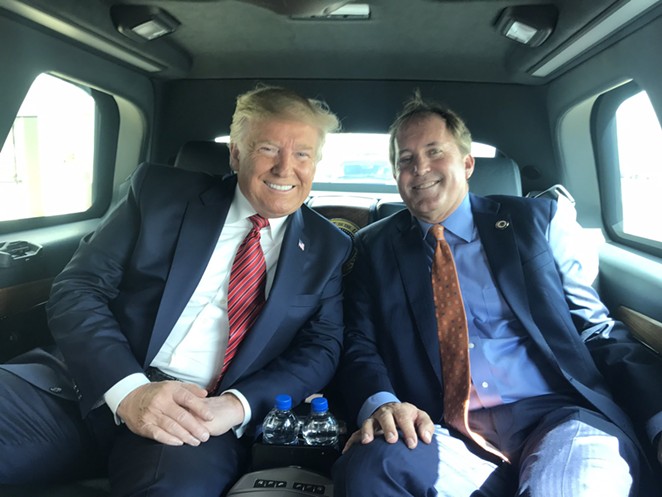 Officials in those states — Georgia, Michigan, Pennsylvania and Wisconsin — derided the filing as an irresponsible publicity stunt. Paxton, a hyper-partisan ally of President Donald Trump, is 2020 co-chair of the Lawyers for Trump coalition.

"Mr. Paxton’s actions are beneath the dignity of the office of Attorney General and the people of the great state of Texas," Michigan Attorney General Dana Nessel said in a statement Tuesday.

In the suit, Paxton — currently under indictment for securities fraud and facing an FBI investigation over allegations of bribery and abuse of office — claims recent changes to election rules in the states violated federal law. As a result, he's asking the high court to block their votes in the Electoral College.

The last-minute filing comes as courts have rejected numerous suits by Trump and his surrogates to throw the election. Recounts in battleground states also have turned up no credible proof of vote rigging, and Trump's own attorney general has publicly stated that the Justice Department found no evidence of widespread election fraud.

"The allegations in the lawsuit are false and irresponsible," Georgia Deputy Secretary of State Jordan Fuchs said in a statement. "Texas alleges that there are 80,000 forged signatures on absentee ballots in Georgia, but they don’t bring forward a single person who this happened to. That’s because it didn’t happen."

Critics also questioned whether Paxton is wading into the election lawsuit frenzy in a bid to grab a pardon from the outgoing president.

“Indicted Attorney General Ken Paxton is setting taxpayer dollars on fire with his frivolous lawsuit meant to undermine the results of a democratic election,” said Ed Espinoza, executive director at Progress Texas. “Paxton’s legal stunt should be questioned intensely. The Attorney General is currently under indictment for fraud and is under FBI investigation for bribery — if it is the case that he is seeking a pardon from Trump in exchange for this lawsuit, that in itself would be a felony.”