Employee departures are hindering the agency's ability to perform basic functions and have contributed to a 'constant state of crisis,' staffers argue in a legal filing. 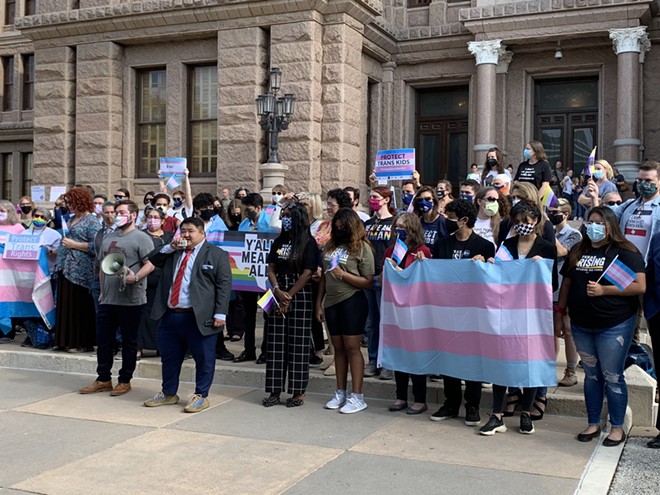 Twitter / @ProgressTX
Advocates gather in Austin last year to speak out against anti-transgender proposals being debated in the GOP-controlled Texas Legislature.
Texas' ongoing investigations of parents who help their children obtain gender-affirming care has put the state's child welfare agency at risk of collapse, staffers from the agency warn in a court filing.

In an Aug. 25 brief filed with an Austin appeals court, 16 current and former Texas Department of Family and Protective Services (DFPS) employees argue that a February order by Republican Gov. Greg Abbott demanding that the agency investigate families with transgender kids for potential child abuse charges is contributing to a dangerous and unprecedented staff exodus.

Those departures are hindering DFPS's ability to perform even basic functions and have contributed to a "constant state of crisis," according to the brief, first reported on by the Austin-American Statesman.

Some 2,000 DFPS workers have resigned this year alone, according to a Houston Chronicle report cited in the legal filing. The departures constitute “the highest voluntary exit rate the department has seen since it became an independent agency in Fall 2017,” according to the Chronicle investigation.

“As career DFPS employees, we respectfully advise the Court that DFPS is on the brink of collapse," the staffers said in the court brief, "and that the politically motivated decision to compel DFPS employees like themselves to investigate nonabusive loving and supportive families who merely rely in good faith on their doctor’s advice would put DFPS over that brink.”

The DFPS workers filed the brief in support of an unnamed agency employee who sued the state after being investigated for letting her own transgender teen receive gender-affirming care. The plaintiffs in that case also include a Houston doctor who treats trans minors.

Abbott's order, which calls for the state to consider possible child abuse charges against parents whose children obtain gender-affirming care such as puberty blockers, has triggered multiple lawsuits and backlash from medical organizations.

The governor has seized on punitive measures against transgender Texans as he campaigns for reelection in November. In March, his top election strategist, Dave Carney, bragged to reporters that investigating the families of trans kids is a "winning issue."

DFPS officials also have shrouded their investigations of families of transgender youths in secrecy, according to records reported on by two separate Texas news organizations. Managers have told staffers not to communicate about cases via email or text — even with families under investigation, records show.

"This will get messy,” one supervisor warned in an email obtained by the Dallas Morning News.