Is Light Rail The Solution To Growing Traffic Congestion Costs In Central Texas? 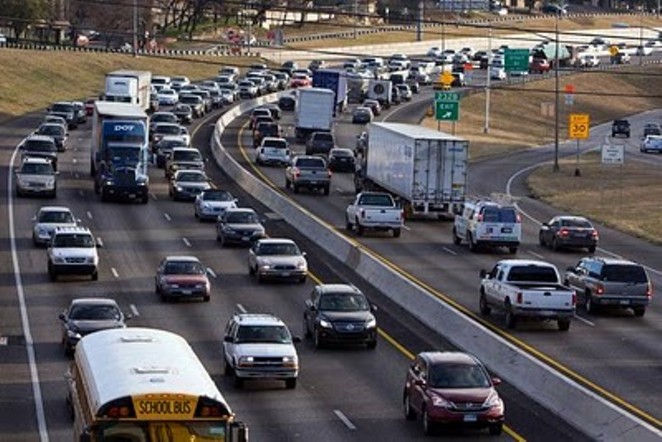 Wikimedia
$6 billion spent on traffic costs last year by residents of Austin, Bexar, Travis, Hays, and Williamson countries.
On your daily commute to work, sitting in the inevitable traffic backup, do you ever wonder how nice it would feel to pull into the roadside shoulder and drive free and clear, passing car after car?

The Federal Highway Administration partners with the The Lone Star Rail District (LSRD) in an endeavor to establish a rail system covering roughly 120 miles from Georgetown to San Antonio.

Austin, the 5th most congested city in America, within the same time frame, wasted an average 42.7 hours in traffic congestion. In perspective, that is worse than Houston, Dallas, and New York.

According to LSRD, the rail will provide essential relief from the I-35 highway congestion. The express trip from downtown Austin to downtown San Antonio would take 75 minutes.

Completing the project, however, crawls slowly forward as the approval for the train involves several different counties, including Austin, Bexar, Travis, Hays and Williamson.

In January of 2015, the LSRD hosted several informational events in both Austin and San Antonio with the intention to gain support for local and state funding of the project.

The Lone Star Rail states environmental advantages for riding the rail as it reduces the amount of car emission. Additionally, the rail claims it will provide business to the areas surrounding their station stops and allows student commuter services to 17 universities all located inside 2 miles of the stops.

The Texas Department of Transportation has already given their consent for the project to move forward, and the LSRD has formally “kicked off the federal environmental process” according to an email sent in September of 2014 from a staff member of LSRD, Allison Schulze, to Alamo area officials and advocates of the project.

The LSRD intends to transform an existing Union Pacific rail line into the commuter line. Thus, in adhering to the National Environmental Policy Act (NEPA), the federal government will evaluate and improve the safety of the rail for transporting people.

LSRD, in an report with KVUE news, states if kept on schedule the project from now until finish will take about 5 years.