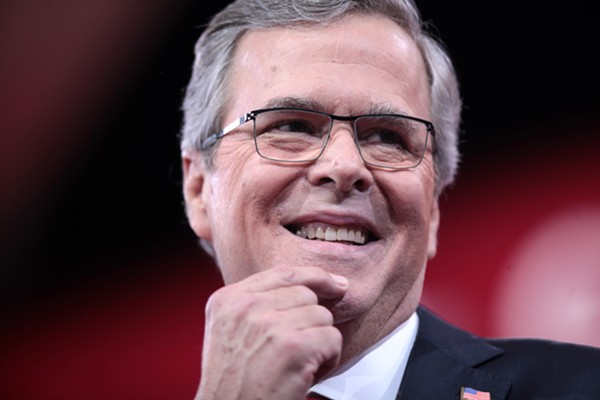 Gage Skidmore/Flickr
Could this man be the nation's first Latino president? No.
Count Jeb Bush among the nation's growing and formidable Hispanic base. The former Governor of Florida, and candidate for the 2016 Republican presidential nomination, registered as a Hispanic voter during in 2009, according to the New York Times.  !Ay dios mio!

He's a scion of the Connecticut-bred, sweater-tied-over-your-Polo Bush family, and, as Gawker points out, a distant descendant of the British monarchy. The son and brother of two former presidents — the latter also a two-term governor of Texas — and father to the current Texas Land Commissioner is as white as white can be. Yes, his wife, Columba, is native to Mexico, and his knowledge of Spanish is superior to my own, but the former jefe of Florida is not Hispanic, demographically speaking. His son, George P. Bush can check that box off a voter registration from, but Jeb cannot.

The Republican candidate, whose positions on immigration and other issues are far more moderate than his fellow GOP presidential hopefuls, responded on Twitter with a quick "my bad," responding to a teasing tweet from his very own son.


Honorary Latino is still not Latino, but he's still more Hispanic than Ted Cruz, though, who is actually Hispanic.