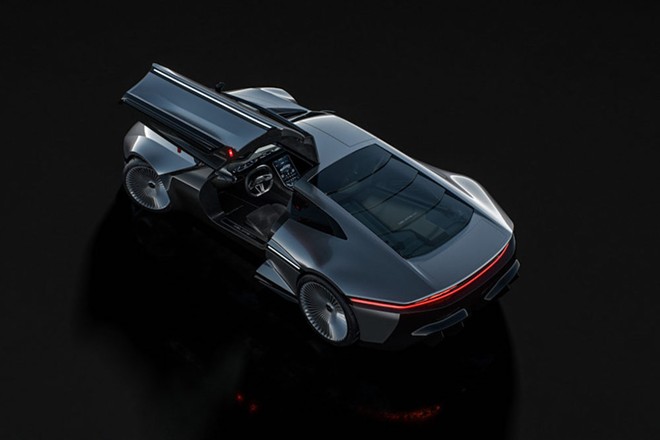 The launch of her new car company comes three months after San Antonio-based electric vehicle maker DeLorean Motors Reimagined debuted its Alpha-5 concept at a car show in Pebble Beach. Its vehicle is inspired  by the 1980s DeLorean sports car popularized in the Back to the Future movie franchise.

"The legacy of John DeLorean came into question after some recent events, and in order to correct the path of history, the car industry reached out to me in an effort to create something really special," Kat DeLorean told the Current.

Kat DeLorean said her company embodies the guiding principles of her late father, including his focus on safety, quality and affordability.

Its forthcoming DeLorean sports car, dubbed the Model JZD, was created by Spanish designer Angel Guerra. The car will be engineered by some of the same people who worked on the original DeLorean concept in the '80s, according to the company.

The Detroit-based business will begin assembly on the JZD in January and unveil the new vehicle around the end of 2023, the company said.

The younger DeLorean has been a vocal critic of San Antonio-based DeLorean Motors Reimagined, which the city and county lured to Port San Antonio with a $1 million incentives package.

In June, Kat DeLorean demanded in an Instagram post that the electric vehicle startup "stop lying and stop speaking about John now, he despised you."

In an email to the Express-News, de Vries called Karma's accusations baseless. However, DeLorean Motors Reimagined has yet to respond to Current's numerous requests for comment.