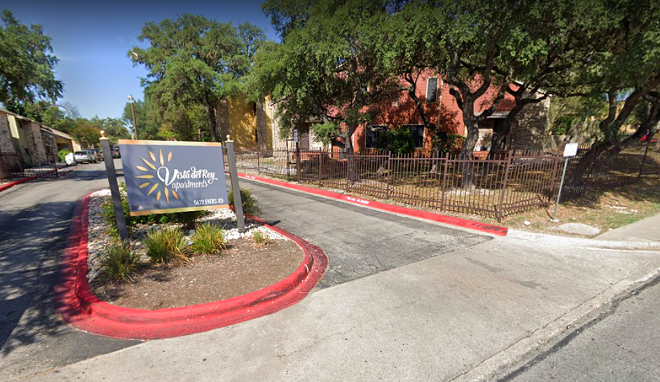 Google Maps
Vista del Ray Apartments are owned by an affiliate of Austin's Shippy Properties, which owns multiple San Antonio complexes.
A district judge has ordered the owner of San Antonio's Vista del Rey Apartments to fix multiple code violations, which the municipality of Leon Valley says are risking the health and safety of its occupants.

Residents of the 450-unit complex have been complaining about conditions there for months, according to the Express-News.

Under the judge's order, 5622 Equity — an affiliate of Austin-based Shippy Properties — has until Sept. 22 to fix pressing issues including exposed wiring, ungrounded electrical outlets and the lack of hot water. The company has another six months to make repairs that require major structural upgrades, including replacing a staircase that fails to meet code, according to the document.

"The residents are facing life safety issues," Leon Valley City Manager Crystal Caldera told the Current. "All of that stuff needs to be addressed immediately."

Shippy Properties was unavailable for immediate comment on the order.

As of late January, Shippy Properties owned some 4,000 living units in San Antonio, according the San Antonio Report. The investment company's website lists 14 Alamo City apartment complexes among its holdings.

In his 2019 book Money Matters for Financial Freedom: The Fast Path to Abundance in Life and Business, company founder and CEO David Shippy laid out his strategy of turning apartment units into "cash machines," according to the San Antonio Report. Shippy explained that he bought working-class apartment facilities while slashing maintenance costs and sticking residents with new fees.

Leon Valley filed its suit against 5622 Equity on Aug. 5, and less than two weeks later, the judge approved an administrative search warrant allowing municipal officials to inventory potential code violations there. Officials with the city maintain the owner has repeatedly refused to fix many of the problems at Vista del Rey despite the pleas of tenants.

When Leon Valley officials executed their search warrant only 40 to 50 tenants granted access to their apartments, officials said.

Under Torres' order, city compliance crews could conduct additional apartment inspections if more tenants allow them inside. That, in turn, could require further repairs from the property owner, city officials maintain.

"The City’s goal with this lawsuit is to cause the property owner to bring the apartment complex up to habitable standards for its residents and to hold this complex to the same standards that apply to any other apartment complex in the City," he said in an emailed statement.