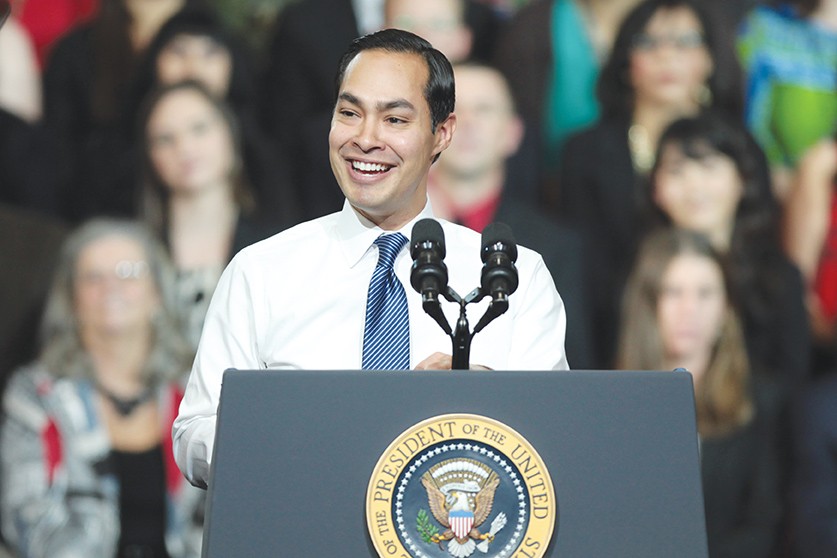 He's kept a fairly low profile over the last year, as much as one can stay out of the limelight being part of a presidential cabinet.

But his name has been bandied about in national political circles in recent weeks as the rumor mill churned out a little tidbit on him being a top candidate for the next Democratic vice presidential nominee.

You've likely figured out that we're talking about SA's Julián Castro, who's now got one year under his belt at the leader of President Obama's U.S. Housing and Urban Development department.

Seen as a rising star in Democratic Party circles for years, the former Alamo City mayor could still come back to Texas someday if his party is ever able to break the Republican statewide stranglehold.

For now, he's coy with the VP rumors and sticks to his main talking point of focusing on his work at HUD.

The San Antonio Current caught up with Castro last month to discuss his time in DC and get his take on what's happening closer to home.

So, congrats, you survived a whole year in DC. Things going like you expected?

It's gone very well. I've made a quick transition and we're pursuing some excellent goals. I'm very excited on what we're doing to end veteran homelessness and to extend opportunities to folks who live in public housing. Excited as well as what we're doing with Promise Zones. It's matched my expectations. I knew it'd be quite different from serving in local government but I've found it very rewarding because of the impact you can make across the country. No doubt it's a more partisan atmosphere here in DC but on most occasions, it doesn't impact my daily job.

What do you have lined up for your second year at the helm of HUD?

We have a goal of ending veteran homelessness, which has gone down by 33 percent between 2010 and 2014. We want to make responsible homeownership more possible by making it more affordable and ensuring folks can get good access to credit. We want to break through silos that often exist and work with local communities to link back to better schools and better jobs.

Some say progress is coming about too slow on the national Promise Zone effort, which includes SA's East Side.

I was still the mayor when we received that and what we've seen is the East Side improve educational outcomes and quality of life. It's early but it's promising. We're seeing higher graduation rates at Sam Houston High School and higher attendance rates at the middle and elementary schools.

So can you tell us anything about your chances of being Hillary Clinton's running mate if she gets the nomination?

Yeah, I'm staying out of the speculation and just trying to do a great job at HUD. I'm gonna stick to doing my day job. I'd rather talk about my job but it's not unexpected to get asked this a lot.

Must be flattering, at least.

What about talk that it was your camp that drummed up the veepstakes?

I haven't been part of that and I'll leave speculation to other people.

So if it the VP nod doesn't pan out, got another office in your sights? Texas Gov. Julián Castro must sound nice.

I'm very much focused on what we can get done in this administration. I'll worry about the future later on down the road.

Did you keep an eye on this year's shenanigans at the Texas legislature?

It was a disappointing session. The Texas legislature is not investing to successfully compete in the 21st century global economy. They need to enhance smart investment in early childhood education and higher education. The version of Pre-K funding [Gov. Gregg Abbott] put forward doesn't make much of a difference. It was just enough to politically make good but not enough to bring about high quality full-day Pre-K. It seems the leadership to some extent has taken its eye off the ball. California is now growing faster than Texas, job-wise. It's not surprising that [Lt. Gov. Dan] Patrick didn't actually clamp down on immigration as harshly as he spoke about on his commercials — he used it as a tool to get elected.

What did you make of the bruising race for your former post?

It wasn't surprising in that I gathered it was gonna be a close race. I congratulate Mayor Taylor on her victory and commend Sen. Van de Putte for a good race.

But Taylor has clearly gone against policies you've put in place. Texas Monthly dubbed her the "Anti-Castro."

I believe that Mayor Taylor ought to set out her vision for the city's future and execute it and I look forward to hearing what that vision is. I try to stay out of local politics. I want her to have the opportunity to govern in her own right. She has a different perspective on several issues but she's just getting started so we'll have to see what happens.

You have your immediate family in DC, but you must get homesick.

I get back to San Antonio as often as I can. I average about once a month. My mother and father and brother and his family are mostly in SA and I look forward to being back home this summer and later on the holidays. I've been away at other points in my life, for law school and so on, but I always look forward to getting back.