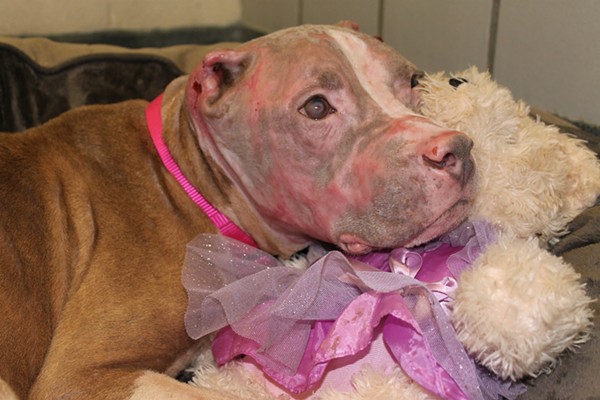 Animal Care Services
A San Antonio pit bull named Rosie captured attention from around the world for all the wrong reasons last August after her owner doused her with corrosive acid.

Rosie now has a new family and is recovering well. As for the man who abused her, he was sentenced Thursday to four years in prison.

Her former owner, 45-year-old Ignacio Sanchez Alvarez, plead guilty Thursday to animal cruelty, Animal Care Services announced. The sentence was enhanced because the judge found the hydrochloric acid Alvarez used to "discipline" his dog was a deadly weapon, ACS spokeswoman Lisa Norwood said. So while Rosie lounges in her new pink pool with her new family, Alvarez will be spending up to four years in prison. He is eligible for parole in two years.

Rosie's plight captured wide attention because of the intense cruelty behind it. One of Rosie's ear's dissolved. She lost half of her other ear. Rosie was temporarily blind and burns covered 100 percent of her face. "I've been with ACS for more than 10 years and I can only think of one other case that was similar, but that actually involved what turned out to be a homemade molotov cocktail," Norwood said. "This was probably one of the most horrifying things I've ever seen. She was in so much pain when she came in." The dog had been in this damaging state for weeks before ACS began investigating, Norwood said.

So why would Alvarez cause such extreme harm to his own dog? "Rosie, like a lot of dogs, is interested in other animals and she showed a very heightened interest in the owner's chickens, so much so that she used to make a nuisance of herself," Norwood said. One day, she accidentally killed one, triggering one of the most horrific cases of animal abuse Norwood has ever seen.

The damage to her eyes was so extensive that ACS put out a public call for donations to fund a special restorative eye surgery. Calls and donations came in from all around the country and as far away as Europe, Norwood said. "She needed a lot of treatment. A lot of recovery time was actually here at the shelter getting healthier for a good two months before she could even go into a foster family," Norwood said. "In that time, her eyes healed themselves. It was really amazing."

Rosie turned out to be a great patient at ACS. Deep down, the pit bull must have known that the vets and staff were there to help, Norwood said, explaining that Rosie became more and more comfortable during her recovery. "They're like people in that. They can be very cautious and concerned when they've gone through hardship and when they've gone through heartbreak," Norwood said. "Then they understand that not every one is like that and they can relax, be vulnerable and become part of a family."