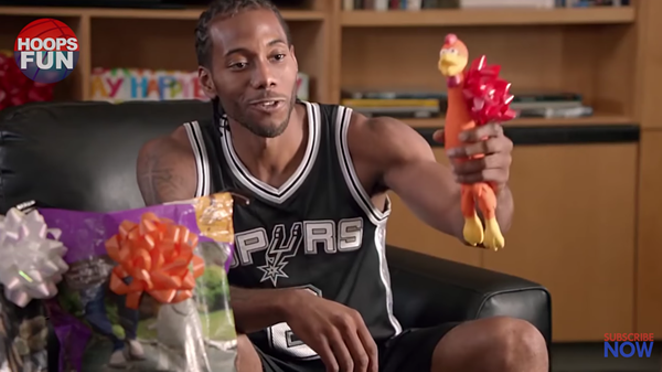 With San Antonio down 108-07, after trailing by as many as 16 points earlier in the night, Leonard calmly curled around a high screen and buried the go-ahead three-pointer over Houston’s Nene. James Harden, who would match Leonard’s game-high 39 points, caught the inbounds pass and raced the other way, with Leonard picking him up at half court (Leonard and Danny Green had shared defensive duties on the Rockets star for most of the night, but it was the two-time Defensive Player of the Year who took the assignment for the final five minutes of this game). Leonard was temporarily caught on a Nene screen, which opened a seam for Harden to get to the basket and tie the game. His shot looked perfect, save for the fact that Leonard had recovered, timed his jump beautifully and used his massive mitt to pin the ball against the backboard.

You could argue that Leonard has been showcasing that kind of two-way brilliance all year long, but it’s only after last night that you’ll see writers and analysts around the league embracing the idea of Leonard alongside frontrunners Harden and Russell Westbrook for league MVP.

Nobody has ever questioned the impact Leonard can make on the defensive end, but it’s how he’s continued to develop as a scorer and playmaker that has him receiving attention in a year where his contemporaries are putting up historical numbers. Oklahoma City’s Westbrook is on pace to be the first player since 1962 to average a triple double, while Harden’s averages of 29.3 points, 11.3 assists and 7.9 rebounds per game would put him in his own rare company.

What both players have accomplished in sheer volume, Leonard has matched in efficiency. He’s shooting significantly better than either from the field and free-throw line, while averaging far less than half as many turnovers. No player in the league can match his elite shooting percentages and low turnover rate with the amount of possessions he uses in a game.

Leonard’s numbers don’t leap off the screen the same way theirs do, but he’s been closing the gap as of late. Over the last month, he’s second to only Westbrook in points per game, averaging over 30 points and nearly 2.5 steals a contest. He’s pushed his scoring average to over 26 per game overall (good for seventh in the league) and, more importantly, he’s led San Antonio to a 10-1 record over that stretch.

And that team success matters. At 49-13, the Spurs are now comfortably in second place in the NBA and nipping at the heels of the Golden State Warriors. They have the second-best point differential, a top-five offense and (once again) the league’s stingiest defense. No other MVP candidate can make those claims.

As we get closer to the playoffs and voters pay more attention to factors like seeding and winning, the way Leonard differentiates himself the pack may matter more. Pundits can go back and forth between Westbrook and Harden on who has had the more statistically impressive season, but Leonard’s two-way resume – the ubiquitous “value” he brings to his team – could be what elevates him to his first MVP award. In a young career that’s been built on exceeding expectations, nothing Leonard does should surprise anyone at this point.