The Supreme Court’s overturning of Roe v. Wade is part of America’s long, shameful history of punishing women for having sex. 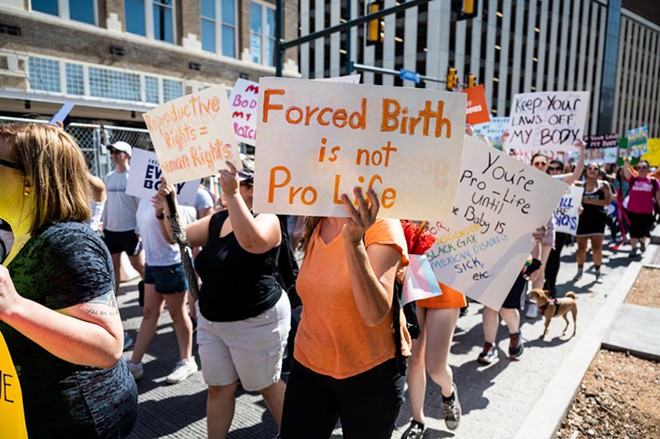 Jaime Monzon
San Antonio women march in support of abortion rights earlier this year.
This article was originally published by the Texas Observer, a nonprofit investigative news outlet. Sign up for their weekly newsletter, or follow them on Facebook and Twitter.

I have never been one to mince words, and I certainly won’t now that the Supreme Court has ended our right to choose. This country hates women; Texas hates women; and Republicans have made it perfectly clear that they don’t care if we die.

They don’t care if we die at the hands of abusers or from poverty or from poor healthcare, and certainly not from dangerous pregnancies, childbirth, and unsafe abortions. In fact, they want women to die from unsafe abortions to build a culture of fear around abortion. They need women to die to further their agenda. We aren’t simply collateral damage — we are the target.

Abortion is healthcare and abortion saves lives. And let’s be honest, every pregnancy is a potential risk to a woman’s life. I didn’t become dangerously ill with my first pregnancy until I was in labor. I was at risk of seizures because I developed preeclampsia, and there was a point when it wasn’t certain I would survive childbirth. My blood pressure skyrocketed. The situation became so dire that my family called in a priest to administer last rites. Before that, I had a completely healthy pregnancy, and there would have been no way to predict the complications that arose at the end. I was lucky and I survived.

Others are not so lucky. Women of color and women in poverty are at much higher risk of maternal mortality. Black women are three times more likely to die from a pregnancy-related cause than white women, a December 2021 study found. Truly, there is no way to predict all potential outcomes. If so, we must assume every pregnancy is a potential risk to a woman’s health and life.

Every woman should have the freedom to decide whether or not to take that risk.

But this issue is about so much more than the right to abortion. A few days after the draft opinion leaked in Dobbs v. Jackson Women’s Health Organization, I began to see folks tweeting and posting about Associate Supreme Court Justice Samuel Alito’s reference, in a footnote, to a “domestic supply of infants.” Some people were shocked and outraged over this phrasing—as if infants were products on an assembly line—and began to speculate about the nefarious agenda of the conservative Supreme Court justices to support an adoption supply chain.

As an adopted person and an adoption reform activist, this possibility is nothing new to me — it’s part of America’s long, shameful history of punishing women for having sex. Before Roe, women facing unplanned pregnancies were routinely sent away to give birth in secret and were often forced to relinquish their children to more deserving parents — in other words, married couples who were wealthy and white.

Now that Roe has been overturned, we will no doubt return to practices common during the “baby scoops” — an era when hundreds of thousands of women and their children were forcibly separated by the predatory U.S. adoption system. Some who wanted to have abortions were forced into adoptions, and other women who wanted to keep their babies were forced to give them up.

The now multi-billion dollar adoption industry will no doubt benefit from the obliteration of reproductive choice. Adoption is packaged as a beautiful and yes, charitable act, but adoption is also an industry that relies on a bountiful supply of infants to stay profitable. Supply and demand—the reference already appears in Alito’s draft. The human and civil rights violations against women and children in this country are already growing, and we aren’t looking deeply enough at the ultimate agenda of Christian conservatives like Associate Supreme Court Justice Amy Coney Barrett.

In Texas, pro-adoption organizations had already been permitted to “educate” in public schools about adoption as a loving solution to an unplanned pregnancy. They openly recruit young girls and target them with glossy advertising with the message that placing a baby up for adoption is a “brave choice”—before they even become pregnant. Adoption agencies also target young women on social media; they have targeted my daughters, and they will target yours.

Ultimately, most of this procurement benefits the Christian right, which views adoption as a form of evangelism and a way to uphold “traditional family values.” This is how they try to ensure white babies end up in white, Christian homes. The system is racist, sexist, and classist at its core and designed to dictate who deserves to be a mother. And what about Black children and the children of poor mothers of color who no longer have the right to choose? They will end up in foster care at a disproportionately high rate if their mothers don’t die first from poor or non-existent prenatal care. Or they and their mothers might be murdered—already the leading cause of death among pregnant women in this country. The 2021 study found that pregnant women are twice as likely to die as a result of homicide than of complications from pregnancy.

​And make no mistake that wealthy Republicans will have no problem getting abortions for their own daughters, sisters, wives, and girlfriends. I doubt any Republican leader would force their own 12-year-old to give birth to their rapist’s baby. But for the rest of the country, they’re good with it.

In a post-Roe country, there is a dark era coming—a Handmaid’s Tale kind of hellscape. Conservatives are lying to you when they say it’s about “saving lives.” Quite the opposite is true and they expect us all to sit still.

All Texans need to stop being so polite in the way we talk about reproductive rights. There is no debate. Your personal beliefs about abortion, whether they are informed by religion or not, aren’t what this is about. If you don’t “believe” in abortion, then don’t have one. Women have miscarriages every day. I had a miscarriage and that wasn’t my choice. Nature decided for me. It seems to be okay if nature or a god decides for us, but when a woman decides, it’s suddenly “murder.”

This is about a woman’s body, our sacred physical and emotional being that belongs to us and us alone. It’s about our freedom to move through life without our bodies being subjugated and weaponized for political gain. The right to bodily autonomy is a self-evident human right that cannot be taken away; it can only be violated. Once we concede that right, we give up everything, and you had better believe they will come for more. It won’t be long until miscarriage is criminalized and we are hunted down like animals.

We already have Senate Bill 8, a vigilante law in Texas that targets anyone who helps another person get an abortion. The Supreme Court’s decision will be immediately felt in our state. These bounty laws are misogynistic terrorism designed to rob us of any and all sense of safety and autonomy.

Despite all the voting, organizing, fundraising, and protesting we women and pro-choice men have already done, it’s not enough. We have to do more and we have to do it now. We have to vote out those who wish to subjugate us for political gain, and we have to take back the state of Texas. It’s our state, damnit.

I’m a sixth-generation Texan and I look forward to a day when I can feel proud of that again. Texas hasn’t had a shred of decency since a woman governed. I sense the late, great Gov. Ann Richards is rolling in her grave and asking: “What the hell? How did we let this happen?” And “How did we all let Roe v. Wade—a decision originally fought for on behalf of a Texas woman by her Texas women attorneys—be torn apart?”