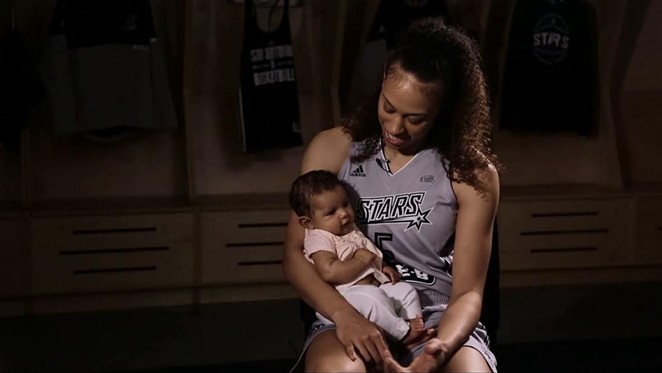 The San Antonio Stars have an extra passenger on road trips this season, but the only dribbling she’s figured out so far is her drool. She’s Amaya Marie Ododa, the four-month old daughter of forward Dearica Hamby.

Amaya was born on Feb. 5, and has been with mom throughout the Stars season. “I’ve been pretty lucky,” Hamby said. She’s a joy. She doesn’t fuss at all.” Hamby said Stars General Manager Ruth Riley and Coach Vickie Johnson have been incredibly supportive of her dual role as mom and forward, and
Amaya has 15 extra aunts during the WNBA season.

Hamby played part of the 2016 Stars season after she found out she was pregnant, leaving the team on Sept. 1. Other athletes have competed while pregnant as well. Serena Williams won the 2017 AustralianOpen and Kerri Walsh Jennings won the 2012 beach volleyball Olympic Gold Medal while pregnant.

Hamby’s maternity leave was short. She was in San Antonio in March, training to get back into game shape. “I got to San Antonio a month before training camp, focused on eating well and building my strength back up,” Hamby said. “I lost more weight than I gained during my pregnancy.”

Hamby was determined to play in the Stars’ first preseason game. It was scheduled for April 29, less than three months after Amaya was born. Hamby started the game and led the Stars with seven rebounds. She hasn’t missed a game this season and is averaging 6 points and 2.9 rebounds per game.

Hamby and the Stars will take on Skylar Diggins and the Dallas Wings at 7 p.m. Friday at the AT&T Center. Friday is also Dollar Drink Night presented by Bud Light and the San Antonio Current. Domestic beer and soda is $1 all night, along with discounted appetizers at a pregame happy hour at Rock & Brews. Browse tickets here.