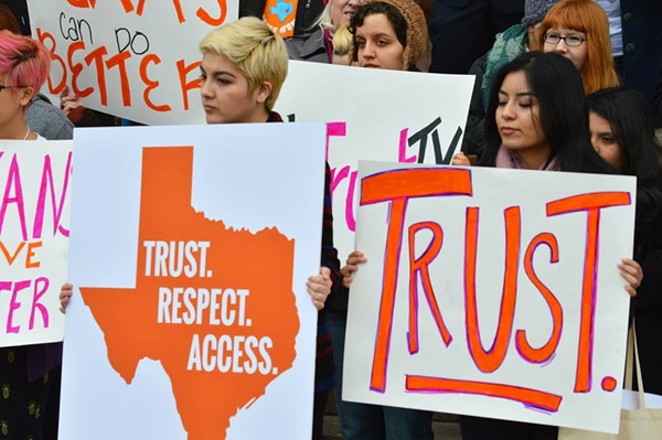 NARAL Pro-Choice Texas/Facebook
A new report shows how House Bill 2 has impacted women's access to abortion clinics.
The U.S. Supreme Court will consider later this year whether House Bill 2, the 2013 law passed by the Texas Legislature, places an "undue burden" on women seeking an abortion.

A newly released study by the Texas Policy Evaluation Project gives a sense of the law's impact. The research group, which is linked to the University of Texas at Austin and studies the impact of laws from the 82nd and 83rd Legislatures, surveyed 398 women at 10 Texas abortion clinics between May and August of 2014.

Here are some key takeaways from their research:

-The clinic closest to most 38 percent of the women closed.

-For women whose closest clinic closed, the average one-way travel distance to the next-closest clinic was 70 miles. Before HB2 passed, that distance was 17 miles.

-About a quarter of the women surveyed lived more than 139 miles away from the closest clinic, and 10 percent lived over 256 miles away. The national average for one-way travel to an abortion clinic is 30 miles.

-Thirty-six percent of women whose nearest abortion clinic closed said that obtaining an abortion was difficult, twice the number of those whose closest clinic remained open.

A decision on the HB2 case, Whole Woman's Health v. Hellerstedt, could come this summer. For more on the case, click here.