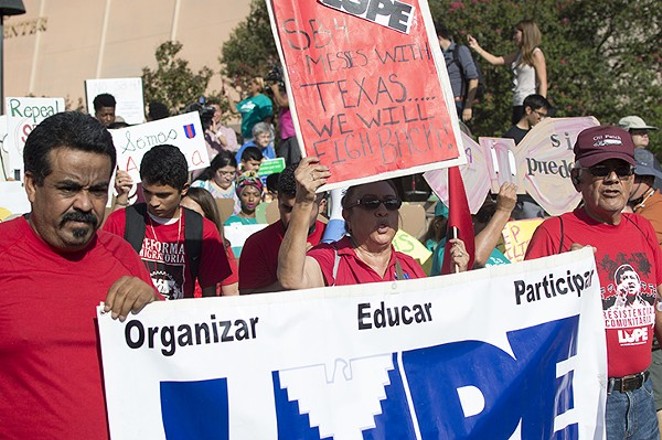 Monica Simmons
Protesters against SB4
Texas could lose billions of dollars if the state's new immigration-enforcement law goes into effect. That's according to a report released Tuesday by Reform Immigration for Texas Alliance, a group of immigration and civil rights advocates.

The group calculated that Senate Bill 4, which was signed into law in May and goes into effect on Sept. 1, could cause Texas to lose around $223 million in state and local taxes and up to $13.8 billion in gross domestic product. SB4 forces police to comply with federal requests to hold undocumented immigrants — if they don't, they could be fined up to $25,500. It would also allow police to question the immigration status of any person they lawfully detain, such as at routine traffic stops.

The group's data — from the 2015 American Community Survey and the Bureau of Economic Analysis — found that that 248,000 jobs and billions of dollars would be lost if just 10 percent of undocumented immigrants were to leave Texas because of Gov. Greg Abbott's crackdown on so-called "sanctuary cities."

But the group says the state should worry about losing more than money and jobs from just the undocumented immigrant community. Opponents of SB4 call it the "show-me-your-papers" law, meaning that they believe the law allows for racial profiling. They contend that the "show-me-your-papers" environment could make people of color less willing to work or visit the state. RITA's Texas Together campaign, a group concerned about the effect that legislation like SB4 can have on business, agrees.

"(The law) essentially allows rogue police officers with badges to harass and intimidate people of color,” Director of Texas Together Adriana Cadena said at a press conference, according to the Express–News. “In doing so, it will drive away individuals from our state. In driving away those individuals, we’re going to feel the consequences in the jobs that will be lost, in the lack of investment we will see.”

The economic appeal is reminiscent of the debate concerning the so-called "bathroom bill." Businesses worry that legislation they deem as discriminatory could effect whether groups outside of Texas will want to do business with the state. So far, the Express–News is reporting that two groups have already canceled their conventions in Texas because of SB4 being signed into law. This follows the recent trend of groups canceling their trips and conventions because of the bathroom bill legislation.

The price that SB4 will have on taxpayers is another economic worry for Texas law enforcement officials. In June, Bexar County Judge Nelson Wolff told News 4 that since 2004, the county's taxpayers have already paid $22 million to comply with federal detainment requests.

Bexar County is one of the many plaintiffs involved in a lawsuit against Texas over SB4. The federal court case, which is working to determine whether the law in constitutional, is still ongoing.