On the Street: Ipod Party, Spurs Collapse (of course), and The House that Grinds...

Like most Friday nights this one began slowly for me.  Soon enough I headed over to the NeoAztlan ipod party at Vtrue Art Space. Several local artists and artist types played short sets from their ipod.  I really like the idea of the ipod party.  I feel like the title "DJ" has been sapped of any of its original meaning. The spirit of mixing and scratching now seems to be reserved for the smaller group of "turntablists".

I liked the idea of an ipod party also because it reduced the amount of gear needed for a dance party.  The ipod gets to the point faster and more people get involved.

The ancient art of DJing.  Another tale from the analog age.

(I switched to flash mode.  Though the picture is more uniformly in focus, the steely blue color temperature misrepresents what it was actually like.  Also, I blasted a performance artist's hair in the foreground.)

Artist Kimberly Aubuchon from Unit B Gallery took the mic.  She seemed to be no stranger to working a crowd.  Her ipod set was focused around songs that utilized the cowbell.

A cowbell was passed around the crowd for group participation.  See what I mean about the ipod breaking the passive performer/audience dynamic.  Okay, I'm exaggerating for cheap effect now...

Back to the cowbell song list.  Immediately when I heard cowbell my mind raced to this sweet-ass song by Nazareth.  When Kimberly played it, all seemed right in the universe.

Saturday pulled me away to an out of town party for the day.  Evidently baby showers are now co-ed gatherings.  From what I've read, baby showers were for  women to get together to celebrate motherhood.  I can't imagine most dudes wanting to change things in a way that would force themselves to get involved, so I wonder what prompted the breaking of tradition.

I talked to a classmate about this issue and he told me how he tried to get out of his own baby shower.

A scene from Saturday's baby shower.  No, no one was actually showered in that waterfall but it was ridiculously impressive.  The locals call it Dead Man's Hole.

Rumor was that Lance Armstrong lived on the other side of those trees somewhere. Allegedly, he polluted the swimming hole through the construction of his house but has now taken action to clean up the mess.  I realize that makes this photo much more menacing...

On Sunday the Spurs opened the first round of the playoffs versus the Denver Nuggets. A mid-season trade brought Allen Iverson and Carmelo Anthony to the same team.  It is a baller's dream.  I would have thought the average conservative Colorado fan would recoil at the non-implications yet the possibility of winning can trump all other personal attitudes, it seems.

A misty tailgate party?  They were playing that horrible song "Are You Ready For This?" from their stereo.  Perhaps that's why we lost.  Oops, didn't mean to give it away, but of course you already knew that.

A friend hooked me up with a ticket the day of the game.  Not a bad seat at all.  We sat on the last row of the lower level.  A guy on a trumpet prepared to play the anthem.  Perhaps they chose him because its National Jazz Month? 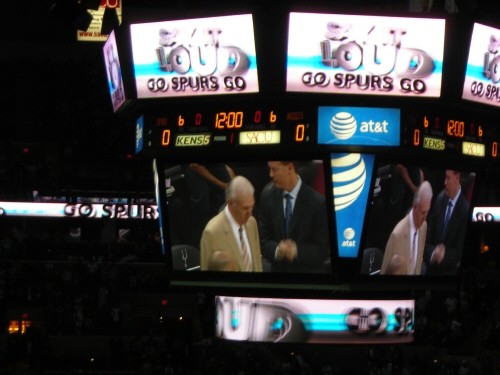 Things were simple then.  We thought we were going to win at this point.

After playing like ass for much of the game, we came back to go up by about 6, and then dwindled in to a one point lead with 8:28 left in the game.  The Big Three didn't do much at all, yet we still hung in.  This is a good sign, right?

The Coyote was the best shooter of the night for the Spurs.   Not long after this point many fans left early.  We came back, and almost had a shot at it but an unneeded falling-out-of-bounds three point attempt by Finley killed any last chance.

Sunday Bloody Sunday, Black Sabbath - call it whatever you want.  It sucked, though completely expected in some ways.  The Spurs always seem to lose the first game of the playoffs.  If I remember, this was the case in 1999, 2003, and 2005.  Of course we won titles those years, so somehow this loss is a positive thing?

On Friday I was finally able to see Grindhouse, the double-feature by Robert Rodriguez and Quintin Tarantino.  Combined it was about 3.5 hours.  Everyone said "you have to see it in the theater with a crowd".  I tried this but being so late to the party I saw it in a nearly empty theater with only one other person.  With the general creepiness of the movies creating a feeling of doom and distrust, I began to feel a general menace from the other patron in the theater.  Of course this feeling was all created in my head, so I suppose this is a backhanded compliment to the film, or films.  And in another way, isn't this the true grindhouse experience - watching a film in a near empty theater with an out of work wacko lurking somewhere in the back row.  Okay, so I exaggerate for effect...

The Rodriguez film - it was probably his best film yet.  I'm not sure if that is a good thing or a bad thing.  His reputation is high as an auteur, but he is a different sort of auteur, more of a low brow auteur.  He's an auteur because he writes, directs, edits, shoots, and scores the music all himself, so in a Hollywood system of two many cooks stirring the pot, the ability for him to be able to get away with all of this is amazing.  There are a couple of reasons he can do this:

1. He doesn't make confusing high art.  His films operate on a comic book level.  I remember being at U.T. and reading his daily comic strip for the daily paper, so I'm not demeaning comic books per se nor his in particular.  His comic strip was actually very funny.  I remember references to heavy metal and the original Taco Cabana on San Pedro.

2. His films make money.  They are made on a low budget and this is because he does so much himself he doesn't have to pay as many key above-the-line positions.

In that sense he is the atypical auteur in that he is successful by Hollywood standards, which is to make money.

His films typically have embraced some sort of drive-in aesthetic so doing a film homage to grindhouse cinema is not a stretch at all.  In fact, this allows him to focus his attention and energy more than ever before.

The beginning of his film showed a fake trailer for a film called "Machete".  It was about a day laborer who is out for revenge for the evil crackers who set him up as the patsy for an Oswald style assassination.  I don't know how else to explain it.  I hoped this trailer was for the film I was about to see but it wasn't.  After seeing "Planet Terror" (I think that was the name of Rodriguez's film) I actually wished he had made Machete instead.  I'll go so far as to say Machete, the trailer, was the best film he's made yet.  I haven't seen all his films but I did accidentally see his first U.T. short film Bedhead at an end of the semester screening so I can say I have some history with his work.  The last one I saw before this was Once Upon a Time in Mexico which was a complete mess.  There were some good lines by Depp but the rest was child-man escapism.

Planet Terror was a maximalist approach to grindhouse.  He focused on an apocalyptic zombie story with several plot twists along the way.  Though it was pure camp, (violent camp) the facts of the story were handed out in a way that kept things interesting, to a point.  George Romero is the obvious connection for the story but I felt it was much more influenced by John Carpenter, even down to the creepy/cheesy synthesizer score (which Carpenter would also do for his films as well.)  One could liken Planet Terror as Rodriguez's "Big Trouble in Little China", but it wasn't as much fun and generally more sexist and sadistic, which is true to the grindhouse genre but at some point one has to wonder when the homage becomes an excuse.

The ending dragged on way too long and I attribute this to having not enough people around him to give him feedback.  Tarantino was around to help out and his presence is felt to a large degree but he had his own movie to make.

And speaking of Tarantino...

His film "Death Proof" I ultimately liked much more even though it had several long, boring sections.   It really had the feel of a Roger Corman film.  It seemed like a legitimate grindhouse film, not an over-the-top pastiche of grindhouse films.

The highpoint of the film is the third act, culminating in an insane death-flirting car chase.  It seemed like a film that was pitched on the basis of this crazy scene they wanted to do in the end and the rest of the film was cheap dialogue filled fodder to save money for the last act.  Of course, he could have spent more money but I almost sense that he gave himself a budgetary challenge to get him into the  feel of the genre.

Death Proof was an homage to film in its own right but within a very specific sub-genre, or sub-genres, mainly, gearhead cinema combined with a certain uncategorized sub-genre surrounding revenge.  I'm thinking of "I Spit On Your Grave", Abel Ferrara's Ms. 45 and films like that.  All of these films were fairly despised so one has to take that into account when considering an homage to grindhouse.  I think Tarantino focused on the lighter side of this grim sub-genre so I don't think its the same thing, but I can understand if one was to be turned off by his casual appreciation for those films.

Having said all this I left the theater exhilarated by the end of Death Proof.  The film went against almost everything modern Hollywood represents, not in an obvious sense because its simple and has a kick ass car chase,  but its different in the ambition.  For me, that was enough.

And so goes another week on the streets of San Antonio.  To be continued...