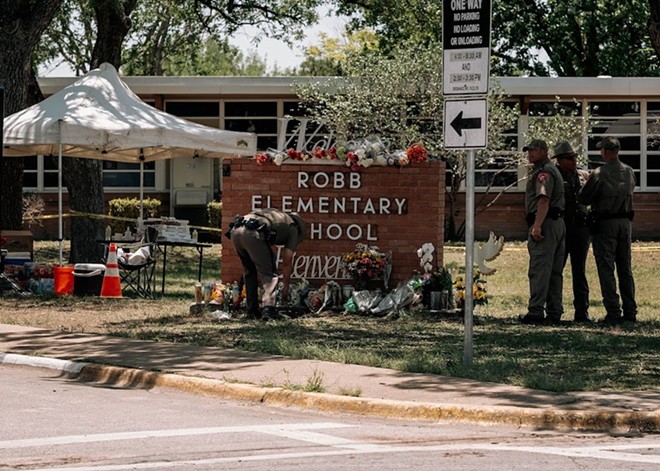 Joseph Guillen
Members of law enforcement lay flowers at a makeshift memorial outside Robb Elementary School.
Sandra Torres, the parent of a child killed during the shooting at Uvalde's Robb Elementary School, filed a federal lawsuit Monday against police, the school district and the maker of the gun used by the shooter, the Associated Press reports.

“My baby never made it out of the school,” Torres said of her 10-year-old daughter Eliahna, one of 19 children and two teachers who perished in the incident. “There’s no accountability or transparency. There’s nothing being done.”

The suit accuses the City of Uvalde, the school district and multiple police agencies of failing to follow established active-shooter protocols, according to the AP. Law enforcement officials' decision to wait 77 minutes to enter the classroom and confront the shooter violated the rights of those trapped inside, according to Torres' petition.

Torres' suit also accuses Daniel Defense, producer of an AR-15 used by the shooter, of marketing the weapon to young men with a potential for violence, a violation of the Federal Trade Commission Act, according to the AP.

The city, school district and police didn't respond to the AP's request for comment. Officials with Daniel Defense also were unavailable.

Torres is receiving assistance from legal arm of gun-control group Everytown for Gun Safety, according to the report.