Landlord Phillip Young, 68, is being charged with one count of aggravated assault with a deadly weapon, according to Denton police.

Reddit / Screenshot
Denton Police arrested Phillip Young, 68, and charged him with one count of aggravated assault with a deadly weapon.
Phillip Young, the Texas landlord who went viral after he was caught on video brandishing a pistol during a disagreement, is now behind bars, according to authorities in North Texas.

A video widely circulated on social media last week appears to show the property owner brandishing a weapon and telling his tenant that he would use it to "protect" himself. In the clip, the landlord also tells his tenant to "figure it out" whether he plans to use the pistol.

On Sept. 9, officers were twice called to a residence near the University of North Texas owned by Young, 68, the Denton Police Department said in a statement on the landlord's arrest. 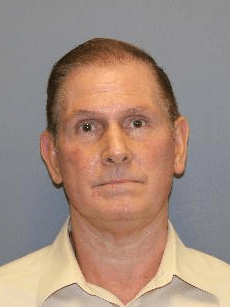 City of Denton
Phillip Young, 68, is currently in custody, and his bail will be set at arraignment, according to Denton police.
Young placed the first call to report that his tenant, whom police haven't publicly identified, tried to use the kitchen without permission. Officers later determined that no criminal offense had occurred.

Later that same day, the tenant called 911 and told police Young had threatened him with a handgun, according to police. Despite Young's statements, the tenant declined to press charges.

In separate video posted Thursday on Reddit, Young is seen telling the tenant that he plans to call immigration authorities on the renter and invite over white supremacists.

"I think I'm going to invite some white supremacists into my home, because you need to get roughed up some," Young says in the newly surfaced clip. "You've apparently never been spanked or anything. You think you can get right in people's faces and tell them what you think you're going to do."

Denton officers ultimately turned over the case to detectives, who reinterviewed both parties. During the investigation, Young admitted to detectives that he considered shooting his tenant during the Sept. 9 incident, according to the Denton Police Department's statement.

Denton police issued a warrant for Young's arrest earlier this week, and he was taken into custody Wednesday without incident. The man faces one count of aggravated assault with a deadly weapon — family violence, authorities said.

Young is currently in jail, and his bail will be determined at arraignment, according to police.