Police chief who led the response to the school shooting in Uvalde had no radio at the scene, reports say

The revelation is the latest to point to deficiencies and missteps in authorities’ response to the shooting at Robb Elementary School. 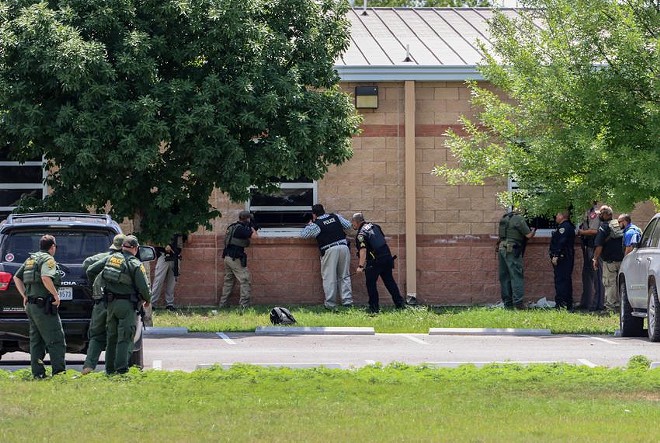 Courtesy of Pete Luna / Uvalde Leader News
Authorities prepared to evacuate students and teachers May 24 after a gunman entered Robb Elementary School in Uvalde.
The Uvalde school district police chief who led the response to last week’s shooting and made the decision to wait for reinforcements while the gunman and survivors were still in the building did not have a police radio when he first arrived on campus, possibly missing reports about the 911 calls coming from inside, according to news reports.

Pete Arredondo, police chief for the Uvalde Consolidated Independent School District, instead used a cellphone to call a police landline to tell officers about the shooter, the New York Times reported Friday. Arredondo told his department that the gunman had an AR-15 but was contained, the Times reported, and to send backup and surround Robb Elementary School.

Arredondo’s decision-making has been widely criticized after it took more than an hour for law enforcement to breach the classroom where the gunman was holed up. Parents begged the dozens of officers outside the school to take action and tried to enter the school themselves. Some were physically restrained.

It was Arredondo who decided to not immediately confront the gunman, who killed 19 children and two teachers and injured 17 others, state law enforcement officials have said. Instead, Arredondo chose to wait for backup and equipment and to treat the gunman as a “barricaded suspect” rather than an active shooter, Steve McCraw, head of the Texas Department of Public Safety, said last week.

Meanwhile, 911 calls from students trapped inside the classroom with the gunman were pouring in to local police dispatchers — including a student begging for police officers to show up. Those calls were routed to the Uvalde Police Department, which operates independently from the school district’s police force, Roland Gutierrez, the state senator who represents Uvalde, said Thursday.

Arredondo presumably did not know about the multiple 911 calls while he was on the scene. McCraw said Arredondo believed no children were in danger, possibly because he did not know any survived inside the classroom.

“Unless there was someone relaying him info, there was no way for him to know there were 911 calls coming from inside that room,” Gutierrez told TV news station WOAI on Friday.

Since the massacre, Arredondo has been in hiding. The 50-year-old police chief has declined to speak publicly about his decision-making during the shooting. Arredondo stopped cooperating with Texas Rangers investigating how the shooting unfolded, DPS officials said earlier this week. Arredondo denied the charge the next day. Recently elected to Uvalde’s City Council, he was sworn into his new role in a closed-door ceremony earlier this week.

At least one school district police officer serving under Arredondo knew people were inside.

The Times reported that Officer Ruben Ruiz had a heartbreaking conversation with his wife, Eva Mireles, a teacher who was inside Robb Elementary, just a few minutes before she was shot and killed.

Experts have said Arredondo’s approach went against modern law enforcement training regarding active shooters, which teaches officers to immediately engage with shooters as soon as possible and not wait for backup, in order to save as many lives as possible. Texas officials have condemned the police response during last week’s shooting as a failure.

The siege ended only after a tactical team led by Border Patrol agents ignored orders not to breach the school and went inside, shooting and killing the gunman, an hour and 22 minutes after he arrived at the school.