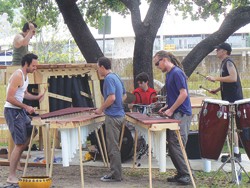 
Blue Man Group meets Afro-pop is one of the best ways to describe the music of Rattletree Marimba, a high-energy dance/trance quintet hailing from Austin. They made their first visit to San Antonio about a month ago and were met with resounding approval. Giant wooden marimbas are their instruments of choice, and live shows are infused with Zimbabwean chants, intricate percussion ensembles, and a boost of energetic spirituality. Rattletree founder Joel Laviolette’s passion for Zimbabwean music has sent him around the world — at the age of 18 he began learning from every American and Canadian marimba player he could meet, then realized he needed to study at the source. He moved to Zimbabwe, where he spent two years learning from his teacher, Newton Gwara, and touring Zimbabwe extensively with his band. Free, 7pm, Blue Star Brewery, 1414 South Alamo, Ste. 105, rattletree.com.