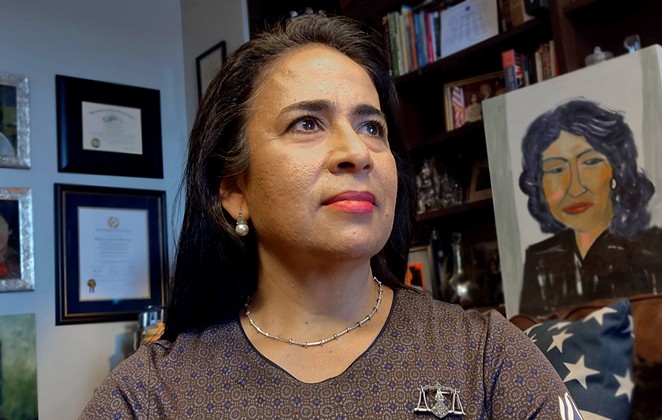 “When I first saw it, I said, ‘Cruz, that’s mine,’” Martinez says, elucidating how she prefers a daily view of her art collection in her office to one of her degrees and certifications. “Been there, done that.”

Since first interviewing Martinez in 2012, I’ve thought of her as a serious-minded individual, but I notice a button sitting on her desk that reads, “I can’t remember your name either.” When I chuckle, she confides, “I’m great at faces, but really bad at names.”

Before we begin, Martinez does some housekeeping by telling me that as a member of the judiciary she’s precluded from weighing in on issues presently in the courtroom.

Having recently interviewed Judge Rosie Speedlin-Gonzalez of County Court at Law 13, an LGBTQ+ activist who made the leap to the bench, I ask Martinez how she balanced serving on the board of the National Association of Women Judges and the Mexican American Bar Association with her demanding judicial life.

“It’s an interesting journey,” she explains. “We can’t assume, though, that every member of the judiciary hasn’t been active in their community at one time or another. We need not look further than, say, [U.S. Supreme Court Associate Justice] Ruth Bader Ginsburg.”

She gestures toward a bobblehead of Ginsburg on the bookshelf to my left. Martinez describes the celebrated role model as a voice of female empowerment who, as an attorney, was an advocate for the women’s movement.

Martinez’s 32-county judicial district encompasses Texas’ southwest quadrant, one of the most diverse areas of the country, she argues.

“My goal has always been to sustain and improve the public’s confidence in the judiciary,” Martinez says.

“At my level, the trial judges in courthouses across the state are the soldiers on the ground,” she adds. “As an intermediate appellate judge, I grade their papers. We hear on appeal ... anywhere from determining money conflicts to determining whether or not you’ll spend the rest of your life in jail.”

She hears every kind of case imaginable, except death penalty cases. “But, if you get 99 years for a sentence, then I’ll hear it,” she calmly adds.

Martinez grew up in a military family, jumping between schools on naval bases from Washington D.C. to San Diego. Her father retired in Corpus Christi where she graduated from high school.

“Thirty years ago, I didn’t see anybody that looked like me on the bench,” she recalls. “[Now], we are used to seeing judges from different backgrounds.”

For emphasis, she shows me a dark-haired Barbie doll dressed in a judge’s robe — a purchase that arrived a few days ago.

Martinez laments that the judiciary, which she considers the most important branch of government, doesn’t get much media coverage. She argues that appellate judges are the most important positions to consider during elections because they often have the last word in lasting legal matters.

Martinez has run three campaigns. And when Republican Chief Justice Sandee Bryan Marion, retires at the end of her six-year term in 2020, Martinez who’s second in seniority, also plans to pursue a Democratic run for her position.

That track record has given Martinez firsthand experience with the indifference an already apathy-ridden electorate often shows the judiciary.

Even those who do know who she is sometimes think her first name is misspelled since “Rebeca” is one “c” short of the most common spelling. But Martinez has learned to see that as a campaign advantage.

“We are essentially asked to campaign like a nonjudicial elected official,” she says. “We have to gain attention to ourselves, and how can we do that when we can’t talk about anything? The only promise I can make is that I promise to follow the law and to be fair and impartial, and then hope that someone is at least interested in who I am as a candidate.”

The judicial code and the understanding that she must appear free of bias sometimes feels like a muzzle, Martinez says. Even when she’s about to like or share something on social media, she must stop and consider whether it might show her leanings on an issue she may one day consider in court.

“So, it’s a privilege to be a judge, but as my mentors have often said, it can be necessarily isolating,” she says. “I don’t actually mind that I can go to H-E-B and nobody recognizes me. I enjoy my anonymity. I can be in a ballcap and my ponytail. I’m a short little Mexican American riding my little scooter, and you never even know it’s me!”

Mayor Ron Nirenberg can’t do that.

As the 2020 election cycle heats up, Texas’ elimination of straight-party voting does concern Martinez. One in four voters cast ballots that way, and she worries the bottom third of the ballot may suffer as voters skip unfamiliar races.

“[Because] nobody cares about us,” she says, leaning into my recording device in a sustained, dramatic whisper. “Nobody knows who we are.”

She cracks a smile.

That sense of humor may help her maintain perspective on the campaign trail.