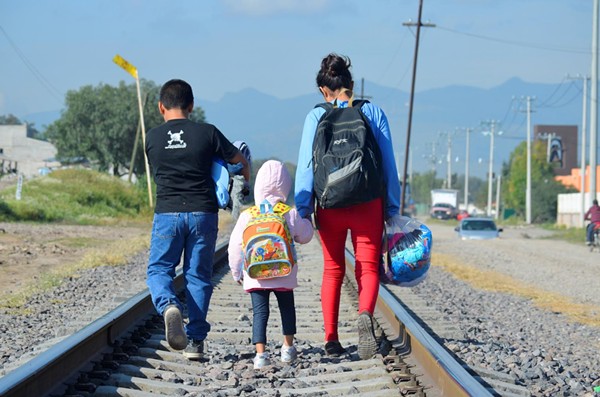 © UNICEF/UNI176266/Ojeda
A 16-year-old girl and her two younger siblings are seen in this December 10, 2014, near a catholic charity that serves migrants at a nearby train station. The trio was in Mexico. They were trying to reach the U.S. from Honduras.
The flow of migrant children from Central America seeking refuge in the United States is growing again despite efforts to dissuade unaccompanied minors from coming here after record numbers of them fled to the U.S. border in mid-2014.

A new report released by the international child welfare organization UNICEF called "Broken Dreams: Central American children's dangerous journey to the United States" reports that in the first six months of this year, 26,000 unaccompanied minors were caught at the U.S. border. That's an increase of 7,500 children from 2015. According to UNICEF, another 29,700 people, mostly women and children traveling as family units, were also apprehended at the border in the first six months of 2016.

After nearly 44,500 unaccompanied children were apprehended at the U.S. border in the first six months of 2014, federal immigration authorities opened up family detention centers to detain the immigrants and spent millions on a public relations campaign in Central America to discouraged people from making the dangerous journey north. However, family detention centers and a public relations campaign haven't changed the fact that Honduras, El Salvador and Guatemala, all of which are plagued by rampant gang violence, have the highest murder rates in the world along with extensive poverty.

“It is heart-rending to think of these children – most of them teenagers, but some even younger – making the grueling and extremely dangerous journey in search of safety and a better life. This flow of young refugees and migrants highlights the critical importance of tackling the violence and socio-economic
conditions in their countries of origin,” UNICEF’s Deputy Executive Director Justin Forsyth says in the report. That is the only way to effectively stop people from making the life-threatening journey to the U.S., according to UNICEF.

However, not all those children make it as far as the U.S. border. In Mexico, more than 16,000 kids were caught trying to escape El Salvador, Guatemala and Honduras and detained by immigration authorities so far this year. Last year, that number was around 35,000 kids, half of whom were unaccompanied minors. Less then one percent of them were granted asylum. Then there are those who set off on the journey and are never seen again. According to UNICEF, hundreds die from exposure or at the hands of violent cartels. But even then, many more are missing. UNICEF suspects they are victims of kidnappings and human trafficking.

For those who do make it to the U.S., they are often caught by Border Patrol and incarcerated in family detention centers before being released to sponsors, usually family members, while their court cases play out in immigration courts. The journey ends for thousands of those migrants with deportation papers.

During the 2015 fiscal year, 75,000 nationals from El Salvador, Guatemala and Honduras were deported from the U.S., which can be a death sentence for anyone, including kids, who fled from gangs because of threats of violence. “We must remember that children, whatever their status, are first and foremost children. We have a duty to keep them safe in a healthy and nurturing environment,” Forsyth said.