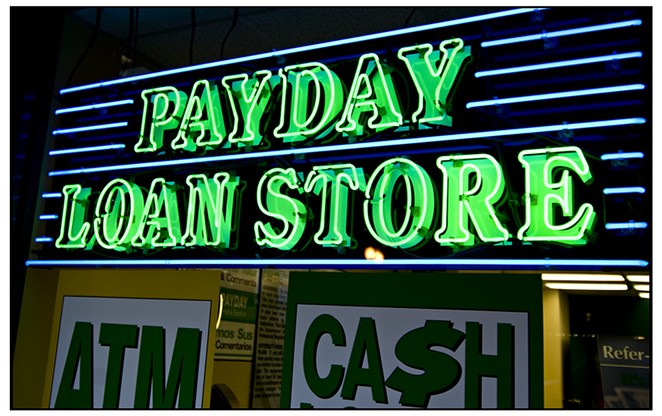 Flickr/swanksalot
An investigation by Texas Appleseed, a statewide consumer advocate and legal assistance organization based in Austin, found that payday loan companies illegally filed criminal complaints against borrowers who can't afford to pay back their loans, a practice banned by state law.

According to Texas Appleseed, between January 2012 and May 2014, 13 payday loan businesses—which in Texas operate as Credit Access Businesses in order to skirt interest rate and fee caps—filed more than 1,500 "theft by check" or "bad check" criminal complaints against consumers unable to pay back their debt. In some cases, the organization found, arrest warrants were issued and consumers face criminal prosecution. State law explicitly prohibits lenders from threatening to file criminal charges against borrowers who can't pay their loans back.

In Bexar County, 191 criminal complaints were filed, with more than $22,000 collected from consumers. A consumer complaint shared with the Current details one example, in which a local payday loan business filed a complaint against a borrower for defaulting on the loan. According to the complaint, the borrower's checks were held as collateral for 11 months. The Office of Consumer Credit Commissioner, the state agency charged with monitoring Texas' payday loan industry, investigated the local business and the complaint was closed.

Payday and auto title lenders are known for notoriously preying on low-income consumers, charging exorbitantly high interest rates and trapping borrowers in a cycle of debt. Currently there is no limit to the number of times a borrower can refinance a loan, nor is there a limit on the number of back-to-back loans, and consumers are often saddled with high loan repayments for much longer than a traditional bank loan, according to the Texas Fair Lending Alliance.

Texas Appleseed's work expands on a 2013 investigation by the Texas Observer, which found that more than 1,700 criminal complaints were filed against borrowers. After unearthing the data, Texas Appleseed filed a complaint with state and federal entities responsible for overseeing the payday loan industry urging regulators to stop the lenders from filing complaints and ensure that wrongful convictions are overturned.

The powerful and high-dollar payday and auto title loan lobby has kept the Texas Legislature from passing any meaningful reforms or statewide cap on fees. Over the last several years, cities and municipalities across the state, including San Antonio, passed their own local ordinances in an attempt to rein in the egregious and predatory practices of payday and auto title lenders.