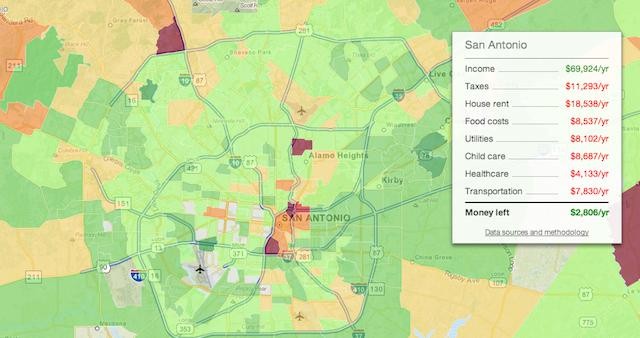 A recent report from Fixr, a home improvement community, ranked 32 cities of Texas with populations of 100,000 or more residents based on how affordable they are for each of nine demographics: from highly educated workaholics to minimum-wage workers.

The Alamo city only had one demographic make it into the top 3. The city was ranked third for most affordable large city for middle-class couples.

Fixr is able to create these rankings by drawing on data from the Bureau of Labor Statistics, and calculating annual household incomes and realistic costs of living for all demographics listed above.

"Our rankings are specific to very well-defined demographics, and this makes a tremendous difference for people planning their personal and professional budgets and lifestyles," CEO of Fixr.com, Andres Torrubia said. "With this level of personalization, you can quickly project your cost of living, and explore our many interactive maps that show affordability of specific neighborhoods in each city."

San Antonio probably doesn’t strike anyone as particularly unaffordable, but Fixr focuses not just on things like taxes and rent but also wages, and, as a recent ‘Cityscrapes’ column points out, good wages are dependent on an educated workforce, something San Antonio still lags in.  To wit, Forbes also released a report of the top 20 most affordable cities in the US and San Antonio was not on the list (no Texas city made it, actually). And unlike the last Forbes-released study that mentioned San Antonio, this one was written by an actual Forbes staff writer, not a PR company president.

Before you jump to conclusion and pack your belongings, Fixr recommends people go check the San Antonio Affordability Atlas and Calculator, which allows you to see neighborhoods color-coded according to their affordability.