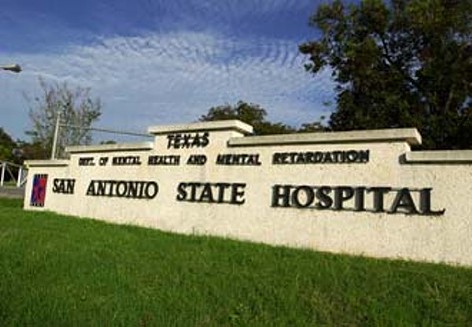 
A recent report has found 80 percent of the facility's network of buildings —some built as far back as 1892 — to be in “critical condition.” The independent research group, appointed by the 2014 legislature, urged the state to tear down every single structure on the property, as first reported by the San Antonio Express-News this weekend. A new replacement facility, according to the study, would cost much less to build than the current cost of simply maintaining the crumbling buildings.


The study’s results, while alarming, are only the latest item to add to a growing list of concerns surrounding SASH that can be linked to state-level neglect.


The state hospital, located in southeast San Antonio, houses more than 300 patients with severe mental illnesses. Most of them are lower-income patients who were voluntarily admitted. A third of these patients, however, are sent to the hospital by court order, either because they were found not guilty of committing a crime “by reason of insanity” or have been deemed incompetent to stand trial.

Usually, a hospital with such a high population of mentally unstable patients comes with serious security and a large nursing staff. That isn’t the case with SASH.


The state hospital has struggled with employee retention for the past decade, and has openly admitted it’s mostly due to pitiful salaries. In 2014, a nursing shortage forced the hospital to turn away patients, pushing them onto busy private hospitals or back into a jail cell. The high nurse-to-patient ratio has also left many staff surveying halls without backup and extremely vulnerable to attacks by violent patients.


Just last week, Texas Department of State Health Services records obtained by the Current illustrated one possible outcome of this depleting staff: At least 91 patients have gone missing from the hospital grounds in the past year. In some cases, this means a patient was missing for a few hours—in others, a few days. And at least in some cases, the “unauthorized departure” involves a very dangerous patient like Gary Ligon, the schizophrenic man charged with dismembering his wife who disappeared from SASH last week.


A DSHS spokesperson blamed this disproportionately high number on the size of the hospital’s campus, suggesting that it’s hard for staff to keep track of patients.


It’s unclear whether this recent study will influence state lawmakers preparing for the 2017 session—and what reforms would even look like. SASH is not the only understaffed state hospital with a hefty waiting list and ancient buildings, despite legislation funneling millions toward mental health programming last session. The estimated cost of a new hospital is $180 million.


“I think we’re at the early stages of what could be some very transformative and impactful positive changes,” said state Rep. Four Price, R-Amarillo, chairman of the Texas House Mental Health Committee, in an interview with the Express-News.