Rick Perry Continues to Defend Trump, Who He Once Called "a Cancer on Conservatism" 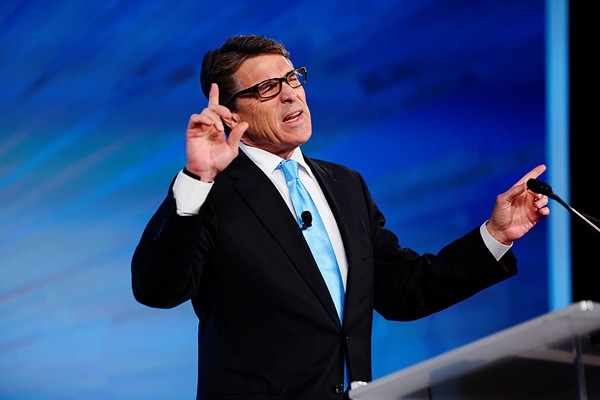 But last year, after Perry's bewildering decision to again run for president, it actually started to look like the former governor's campaign might be a little less embarrassing the second time around. In addition to his new smart-guy glasses, Perry early on managed to deliver what many considered to be a remarkably cogent speech on race, in which he lamented that "when we (Republicans) gave up trying to win the support of African-Americans, we lost our moral legitimacy as the party of Lincoln.” Later that summer, after Donald Trump launched his campaign by calling Mexicans "rapists," Perry emerged as one of the loudest, clearest voices within his party to denounce the real estate mogul as a "toxic mix of demagoguery and mean-spiritedness and nonsense that will lead the Republican party to perdition if pursued.”

It really wasn't that long ago that Perry said stuff like this about the Republican nominee for president: "Let no one be mistaken: Donald Trump’s candidacy is a cancer on conservatism, and it must be clearly diagnosed, excised, and discarded."

Which is why it was so awkward when Perry, less than a year later, not only endorsed Trump but even said he'd be interested in being a vice presidential pick. As a Trump shill, Perry has gone on to deliver creep-tastic lines like this one about Hillary Clinton: "Donald Trump will peel her skin off in a debate."

This week we got another reminder that Perry is vocally supporting a candidate he once said would lead to "perdition" (definition: "the state of being in hell forever as punishment after death"). This time it deals with Trump's regrettable "war of words" with the father of a fallen muslim soldier who has, not surprisingly, criticized Trump's proposal to ban muslim immigrants from entering the country.

The controversy, which hinges on Trump's compulsion to antagonize the Gold Star family, has become so politically toxic that other Republicans, like Perry's successor to the governorship, have urged the utmost respect for the family (Gov. Greg Abbott said in a statement earlier this month, "The service and devotion of Gold Star families to America cannot be questioned").

Perry, nevertheless, decided this was a feud worth fueling. In an interview on CNN Tuesday, Perry said the soldier's father "shouldn’t get a free ride when he’s going to inject himself into the political arena." Among other things, Perry said during the interview: "In a campaign, if you’re going to go out and think that you can take a shot at somebody and not have incoming coming back at you, shame on you."

It's not entirely clear what Perry thinks he can gain by so vocally defending Trump at this point—even when others in his party and state refuse to do the same. While he wasn't picked for vice president, maybe the former governor actually believes some of those vague assurances that he'd be up for a senior role in the administration of someone Perry not long ago called "a barking carnival act."