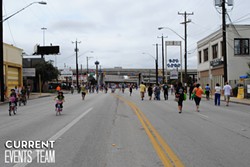 Look, I love the idea of SíclovÍa, which closes down a major road to car traffic so cyclists and others can enjoy the full roadway, as much as the next person. It’s a fun, unique way to promote cycling in our city. But after two years and multiple events, how much has it improved biking awareness around San Antonio during any other day or night?

I ask because SA can still seem like a pretty dangerous place on two wheels. Take, for instance, a horrific hit and run that happened mere blocks away from Síclovía’s downtown location just hours after the event wrapped up.

As KSAT first reported, Amber-Rai Lee, 26, and her boyfriend Juran Addison, 28, were riding bikes downtown late Sunday night when they were hit by a Chevrolet Tahoe, which knocked them both off their bikes. KSAT’s brief report stated that “police and EMS found them” and that “the woman refused treatment and convinced the man to walk with her four more blocks to the downtown Baptist Hospital.”

That’s basically the gist of the KSAT story, which generated 21 comments online, some of them blaming the victims for being drunk, riding without lights and/or just being on a bicycle late at night. Lee was more than a little pissed off.  “Look at that shit,” she wrote on a Facebook post that linked to the KSAT story the following day. “I’ve never seen 15 cops and paramedics standing around while my boyfriend bleeds to death. We walked faster than it took them to even get there.”

She was also annoyed at the assumption by many that she and Addison must have been drunk or somehow partially responsible. I found out about her story through a mutual friend involved in the local cycling community and decided to get her side of the incident.

What good are bike routes if they're not safe for cyclists?

According to Lee, she had just gotten off work as a waitress at Stella Public House in Blue Star and wanted to grab a quick bite at the late night taco truck on the St. Mary’s Strip neat Hardbodies, one of the few places open that late on a Sunday night near downtown, which also had the benefit of allowing she and Addison to walk the new puppy Addison had carried over on his bike. They departed the Blue Star area and headed north. At the intersection of Camden and St. Mary’s streets around 2 a.m., a metallic (Lee says silver, the police report mentions gold) SUV without its headlights on rear-ended Addison, throwing him off his bike and in front of Lee. The Tahoe then plowed into Lee, throwing her from her bike as well. According to Lee, having just left work, she was sober, as was Addison. Both were riding with their bike headlights on. Ironically, there are large green signs designating that area of St. Mary’s as a bike route all around the intersection. The driver briefly stopped the car.

That’s when things got messy.

“There’s no doubt they were intoxicated,” said Lee, who approached the vehicle while Addison struggled to get up from the road. Lee says she heard the male passenger tell the female passenger to drive away, and so Lee started taking photographs with her camera phone of the license plate, the woman and the man. Lee, who makes no bones about being “hysterical” at the time, pulled the driver out of the car to try to keep her from fleeing the scene as she called the police. The confrontation quickly got physical, with the male passenger attacking Lee. At that point Addison tried to get the man off of his girlfriend, and punches were thrown. The couple eventually shook off Addison and Lee and left the scene. Lee claims she smelled alcohol on the female driver and cites the male driver’s aggressive behavior (which included taking off his shirt and attempting to fight her) plus the lack of headlights as proof that the pair was inebriated.

Meanwhile, Lee said Addison was losing a large amount of blood from a head wound. “He was all woozy,” she said. Lee frantically called 911 for an ambulance, but says the dispatcher hung up on her because she couldn’t calm down. She and Addison left their bikes and began to walk toward nearby Baptist hospital and shortly saw a police car. Lee flagged him down, hoping for a ride to Baptist. Instead, the police called for EMS and, according to Lee, tried to get information about the hit and run while waiting for the ambulance. The police report states that the EMS arrived, but that Lee and Addison refused transportation. Lee said she was frustrated that the ordeal was taking too long and that the police didn't immediately appear to search for the Tahoe. According to Lee, the police even required her to walk back to the scene and retrieve the bicycles, which SAPD then took as evidence. She decided she and Addison could probably walk to the hospital faster than it would take them to leave the scene in an ambulance.

The police report states that they did not apply a drug or alcohol test to either victim. There’s a separate code to indicate whether the party refused to take the tests, which was not used in the report. The report also estimated the damage done as greater than $1000 to each victim, and attributes the crash to “driver inattention,” although, since the cyclists have to be classified as “drivers” it’s unclear which party was inattentive in the investigator’s opinion. Addison and Lee did make it to the hospital at around 2:15 a.m., where Addison received 16 staples in his head for a laceration. Lee and the puppy made it out scratched and bruised, but not injured seriously.

The couple has not heard back from SAPD about the status of their case, despite having provided the detectives with photos of the alleged perpetrators and their license plate. The Current also repeatedly inquired and has not been given a status update.

The morals of this story are many: A) bike hit-and-runs should be treated just as seriously as car hit-and-runs, especially when they occur along designated bike routes. (The entire crash report, as drawn up by the Texas Department of Transportation, doesn’t have any specific designation for bicycles at all). B) Judging from the reaction to the KSAT story, and the tone of the story itself, more outreach needs to be done to educate San Antonians about sharing the road, and that cyclists are not the de facto at fault party in an accident simply for being on the roadway in the first place. C) For the love of God, cyclists, wear your damn helmets.