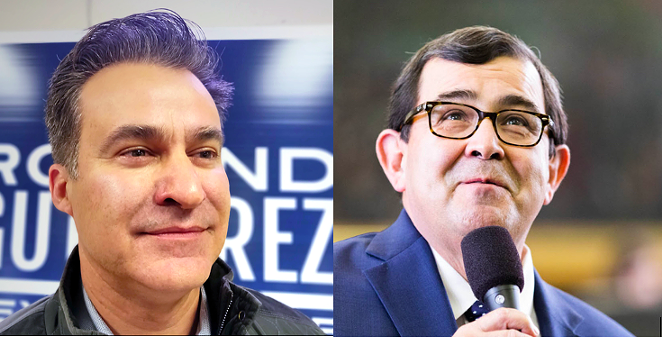 Jade Esteban Estrada (left) and Facebook / Texas Sen. Pete Flores (right)
Democratic Texas Rep. Roland Gutierrez (left) scored a victory against first-term Texas Sen. Pete Flores (right), a Republican.
If progressives smarting from Democrats' 2020 underperformance in Texas need a bright spot right now, there is one to be found — and it's in the Alamo City, or at least Alamo City-adjacent.

With more than 40% of the votes counted, Texas Rep. Roland Gutierrez, D-San Antonio, has a hefty 34-point lead on freshman State Sen. Pete Flores, R-Pleasanton. And a Gutierrez victory would end the 19-seat supermajority Republicans need to bring up bills in the Senate under current rules.

Flores' Senate District 19 sprawls from SA into West Texas and was a longtime blue stronghold before Flores out-hustled his Democratic rival to land a 2018 special election win.

Coming into this week's contest, the GOP commanded 19 seats to Democrats’ 12 in the Texas Senate. Flores' likely loss would strip Republican Lt. Gov. Dan Patrick of the supermajority he's wielded to move conservative legislation to the Texas House without compromise.

But before Dems pop the cork on the champagne they left untouched last night, there's a caveat.

Patrick, the architect of Texas' failed bathroom bill, led a 2015 rule change to lower the supermajority rule from 21 to 19 back in 2015, and earlier this year, he threatened to lower the threshold even further — something he could do with a simple majority vote.