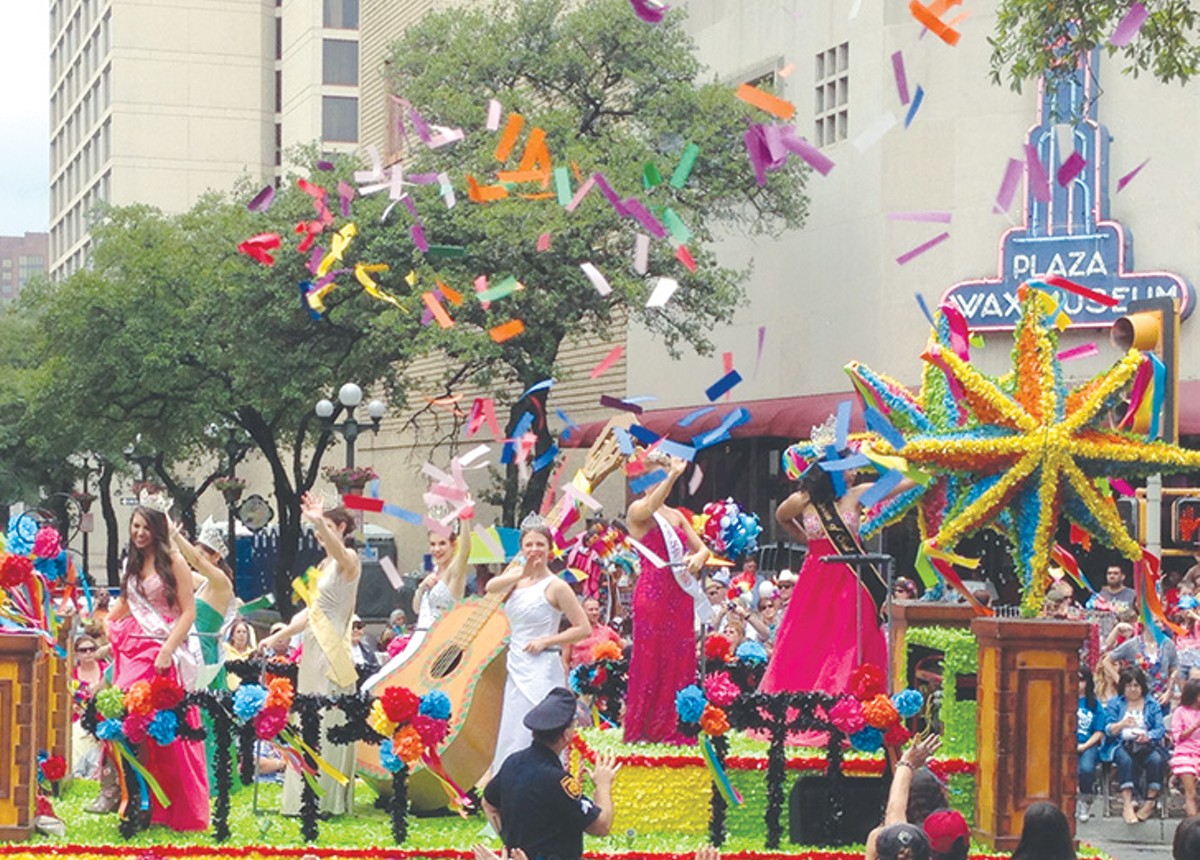 It's a great party. Fiesta that is.

It's a financial boon for a host of deserving local organizations, from neighborhood groups like the King William Association, to local universities and, of course, the Conservation Society and NIOSA. And Fiesta gives San Antonians, and a flood of visitors, an opportunity to enjoy live entertainment, eat unique foods, and drink beer.

Fiesta San Jacinto's marquee event, the Battle of Flowers, began in 1891 as a commemoration of the Battle of San Jacinto, timed to coincide with a visit to the Alamo City by President William Henry Harrison. But what we now experience as the full panoply of Fiesta pomp and royalty — the grand Coronation of the Queen of the Order of the Alamo with its elaborate gowns, the anointing of King Antonio by his colleagues in the Texas Cavaliers — were rather later, 20th century inventions. And for the creation of Fiesta and San Antonio royalty we have one man to thank: John B. Carrington.

Carrington, born in Virginia, arrived in San Antonio in 1902. Within a few years, as secretary of the Business Men's Club (predecessor of the Greater San Antonio Chamber of Commerce) he emerged as a tireless booster and promoter of the city. Carrington organized an expedition from San Antonio to the Rio Grande Valley, pressing the case for a new railroad link to the south while garnering financial pledges from cities and business leaders along the way. He also served as secretary of the Publicity League, a new organization funded by city business and civic leaders in 1907 with the goal of promoting the community throughout North America, literally to "make its name and fame known throughout the land."

Newspapers and magazines from National Geographic to the Winnipeg Free Press were soon filled with glowing advertisements promoting "Tropical Luxury" and "Texas' Largest City." Readers were urged "This winter take the children to Sunny San Antonio and let them romp outdoors. One dose of bracing air, equal parts of sunshine, one month of wholesome exercise will discount any number of doctors' bills." By 1910, Carrington could argue in print "One Texas City Advertises Itself Into Prosperity," with "the leading business and professional men of San Antonio united in writing letters declaring that this municipal advertising had proven profitable to them personally."

Carrington's efforts did not stop with railroads or city advertising. He was an energetic promoter of the city as a location for conventions and meetings, pressing for the construction of a grand new convention hall — Municipal Auditorium, now the Tobin Center — and securing the land leases for what would become Kelly Field.

But perhaps Carrington's most singular, if little recognized, contribution to San Antonio was his invention of Fiesta royalty. Laura Hernandez-Ehrisman tells much of the tale in her 2008 book Inventing the Fiesta City. In 1909, Carrington led the effort to replace the Battle of Flowers Association, which had previously selected the Fiesta Queen, with a new organization, the "Order of the Alamo." Announced to the public as a means of "making the Battle of Flowers an event in keeping with the occasion which it celebrates," the new group was composed of the most prominent young men of the city, almost entirely the Anglo business leaders of the Business Men's Club and the Publicity League. And the new and improved pageant was to include the election of a duchess from "each of the nearby towns, who will be attended by pages and courtiers of her own," luring ever more visitors to San Antonio.

The first grand coronation in April 1909 brought the "fairest ladies" and the "boldest esquires of the finest state" to San Antonio from "the far-off corner of the state wherein Brownsville nestles, to the gulf-swept beach of Galveston." And lest any detail be left to chance, Carrington himself served as court announcer.

By 1926, having managed two stints as head of the Chamber of Commerce, Carrington envisioned yet another dose of Fiesta royalty, the Texas Cavaliers. A king for Fiesta had been chosen since 1896, first by the Battle of Flowers Association, then by the Carnival Association or the Fiesta Association. The tradition stalled in 1925 and 1926 when no kings were named. Carrington's new Cavaliers would choose a new Fiesta King in 1927, with its first efforts focused on maintaining the spirit of pioneer Texans and virtues of horsemanship. Its initial outing at the 1926 Fiesta celebration was a tournament, with the knights of San Antonio jousting on horseback.

Carrington had envisioned an organization of both local business leaders and Army officers, and it was intentionally not the "San Antonio Cavaliers." Carrington planned on a group that would spread as chapters in cities and towns throughout the state. The formal tournaments, the commitment to furthering horsemanship, the ties between the Army and local business, the full panoply of regal trappings (knights, chevaliers, princesses), and the statewide organization were never quite realized. Yet with the Texas Cavaliers and the Order of the Alamo, Carrington did succeed in giving the raw, frontier town its own (almost entirely Anglo) royalty of bankers, lawyers, car and hardware dealers that choose a King Antonio for us.

So at Fiesta time, it's appropriate to give a tip of the hat to Carrington, who made us in some ways royal, but who really taught the lesson that some better-off San Antonians have long believed, down to the present, that we can somehow advertise this city to prosperity.