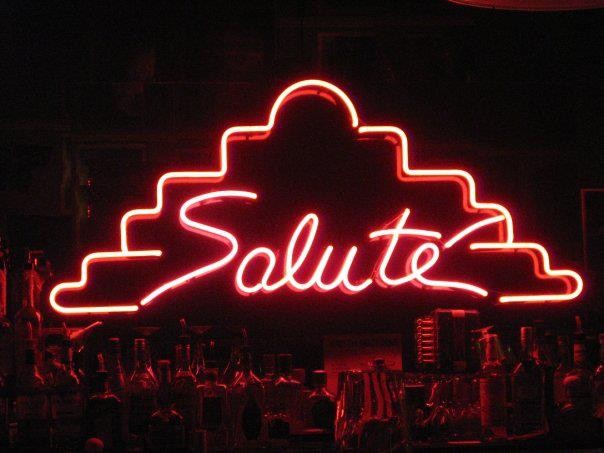 The demise of the landmark Saluté International Bar on North St. Mary’s Street at the end of July created quite a stir as plans to unwind the venue in a neat fashion ended in a knotty tangle involving new owner Casey Lange, tenant and Saluté proprietor Azeneth Domínguez, and her supporters. And while the iconic musical and artistic locale might be a landmark in journo-speak, that designation is not yet official.

The Saluté Historic Preservation Committee will receive a hearing on its petition for landmark status before the city’s Historic and Design Review Commission (HDRC) at 3 p.m. on November 21 (located in the 1st Floor Board Room of the Development & Business Services Center at 1901 S Alamo St.). If it passes muster there, the application will go first to a City Council subcommittee and then the entire Council. In order to qualify as an historic landmark, petitioners must prove three cultural, historical, or architectural criteria from a list of 16.

“Not only did the two members of the HDRC think the application was justified, but also Casey Lange

The findings of the visit are as follows:

“The Designation and Demolition Committee performed a site visit to this property on November 14, 2012, at which time the committee found that the existing building is in good shape physically and serves an important role in the city’s cultural heritage.

Staff finds that the Saluté International Bar meets four of the UDC’s specified criteria for a finding of historic significance in the process of seeking designation as a local historic landmark as referenced above. In order to be eligible for landmark designation, a property must meet at least three of the criteria. Staff also finds that there has been considerable support, including support from the building’s owner, for landmark designation of this property.

RECOMMENDATION: Staff recommends approval as submitted based on these findings.”

Saluté had a 25-year-run before closing its doors. Conjunto and Tejano greats graced the stage, including Grammy laureate Flaco Jiménez, accordion virtuoso Esteban Jordan, Sexto Sol, as well as a range of rockers, country musicians, punk bands, and more. Former proprietor Domínguez, who has recently suffered health problems, had reportedly been attempting to sell the establishment in recent years.

After Limelight owner Casey Lange acquired the building which houses the venue, Saluté had a final blowout — and then a blowup. The Current broke the story, which led to the police being called after Lange locked Domínguez and supporters out.

Was the timing of the petition a gambit in response to the “landlord/tenant dispute,” as new owner Lange described the brouhaha and subsequent lockout? He did not return numerous calls seeking comment, but the answer is, “no.”

According to Gould, steps to receive a cultural landmark designation from the city have been underway about a year ago at Domínguez's initiation and with the previous landlord's consent (Embrey Simpson). Domínguez wants to see a historic plaque affixed to the building, and a prerequisite for that is receiving the landmark designation. However, as often happens, other pressing matters distracted the process and the application was temporarily shelved.

If Saluté obtains its official landmark status (and it appears it will), the only downside for Lange is that he will have to seek an additional permit from the HDRC if he tries to undertake any exterior structural modifications. On the upside, he enjoys the freedom to operate the interior as he sees fit, will be eligible for tax incentives for remodeling or improvements, and will likely see his property value appreciate.

So, with the denouement of the landlord/tenant dispute, instead of impassioned arguments for the cultural significance of Saluté, the HDRC hearing will likely be an occasion for speakers to praise the venue, get some closure, and then begin the bureaucratic wait for Domínguez's well-deserved plaque. — Jeffrey Wright