San Antonians Should Be Wary When VIA Asks for More Money 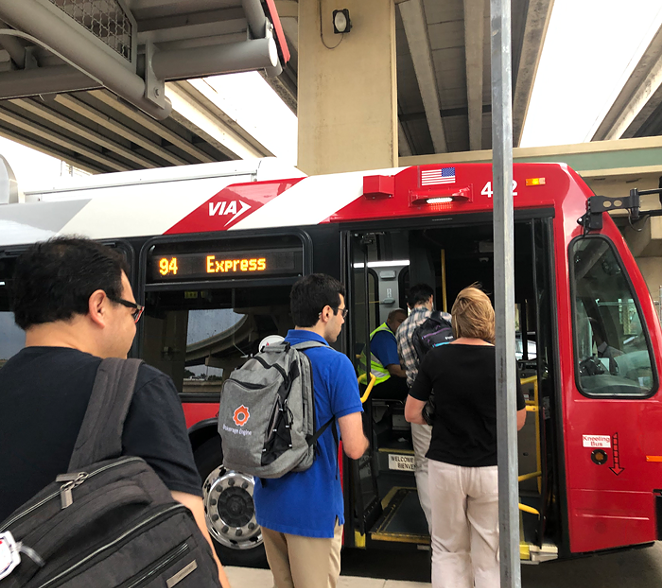 Courtesy of VIA Metropolitan Transift
Editor’s Note: The following is CityScrapes, a column of opinion and analysis.

"County can have first metropolitan bus service in the state,” proclaimed the headline in the Express-News on October 15, 1977.

In advance of an early November vote on a sales tax for the proposed Metropolitan Transit Authority, the article laid out the case for public support for the new bus service. The newly created authority would relieve the city, back then the owner of the local bus system, of the cost of subsidizing service.

But the promise of the authority that we now know as VIA Metropolitan Transit was greatly upgraded transit service — service that would only require a half-cent sales tax. The article quoted transit backers saying the proposed half-cent sales tax, as opposed to the full penny the state law allowed, would “be enough to keep expanding services,” with no need for the higher tax “in the foreseeable future.” They promised increased service with new routes, more express busses, improved facilities and new park and ride lots. Proponents also claimed that the new authority and tax “will add to the revitalization of the downtown area through improved transit service.”

“With MTA [now VIA], San Antonio will have a chance to lead the state — and even the nation — in mass transit,” interim authority chair Marilyn Jones said.
Right next to the bold headline was an area map showing the proposed park and ride lots that would come with the new transit service. Ten in all, they were spread out around the city, with five ringing Loop 410 on the north and another five on the south, along U.S. Highway 90, Military Drive and W.W. White Road.

Today, VIA’s website shows just eight park and rides, including a two-year old Stone Oak facility. And that counts the Ellis Alley park and ride, on the near east side of downtown at Sunset Station. More than 40 years later, the promises of the sales tax vote that created VIA appear not quite realized.
And today, as the VIA board presses for a November vote on a sales tax increase, it’s not at all clear what VIA sees as its actual purpose. If passed, the tax could generate up to $40 million per year, but the system hasn’t yet announced full plans for how it will spend the funds.

The promise of “downtown revitalization” that was trumpeted in 1977 as a benefit of a municipal bus service has appeared to preoccupy VIA over the years. There was the unused half-cent tax allowed by state law that then-Mayor Henry Cisneros succeeded in borrowing for a “regional economic generator” known as the Alamodome. And the deal with VIA for the dome tax came with the authority’s ownership of Sunset Station and a series of largely abortive efforts to revitalize the St. Paul Square area.

The goal of turning the former Southern Pacific station into a multiple-venue, music-oriented entertainment complex somehow required more nearby parking. And thus, the planned Airport South park and ride migrated waaaay south to the near east side of downtown and became the Ellis Alley park and ride. However, more parking wasn’t nearly enough to make the entertainment venue succeed.

And VIA’s beyond-bus vision proved even more expansive with the proposed 53.5-mile, $1.5 billion light rail proposal that landed on the ballot in May 2000. Despite the overwhelming voter rejection of the light rail scheme, VIA has kept returning with revitalization dreams and the image of a development — not necessarily transit — agency.

The Westside Multimodal Center, now VIA’s Centro Plaza, came with repeated promises that it would lead to massive new private investment and the creation of a new “urban village” on the near West Side. And that center would be paired with a new downtown streetcar system that would somehow bring the revitalization depicted in 1977.

What we got was VIA’s purchase of the old I&GN train station — later home to the city employees’ credit union — as a new headquarters, a flying-saucer topped bus transfer station and a vacant building that VIA wants to use to “enhance” the surrounding neighborhood. As for the downtown streetcar, it was abandoned by the mayor and county judge — the result of a petition campaign that would put the city’s spending to a public vote, and the real fear by local officials that it would be voted down.

Fast forward to 2020. VIA wants yet another tax increase, and the big question is exactly what we are buying with those sales tax dollars? Is it a commitment to maintaining needed bus service for our transit-dependent populace?

Or is it the first step in yet another grand vision, this time of high-speed “not rail” lines reaching out to 1604, of a transit line (or lines) through downtown, and ever more development deals for the well-connected?

As San Antonio struggles through the economic calamity of the pandemic, the last thing we need is another blank check for VIA.