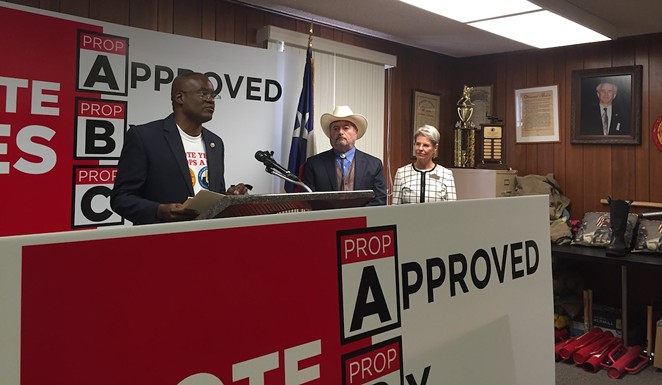 Sanford Nowlin
Fire union chief Chris Steele speaks to the press at a 2018 news conference on the union's ballot initiatives.
Capping a five-year streetlight, the City of San Antonio and its fire union headed into arbitration on Monday to end their stalemate over a labor contract.

A panel of arbitrators will work between now and December 17 to end a five-year impasse over firefighters' pay and benefits. At the end of that period, both sides must agree to the compromise struck by the three-member panel.

San Antonio firefighters have been without a contract since 2014. However, an evergreen clause in their prior pact has kept their pay and benefits in place.

The breakdown in talks prompted a lengthy legal fight that only ended last November, when the city finally dropped its suit against the union. The Texas Supreme Court opted not to hear the case, exhausting all its appeals.

The impasse also led to a public, often nasty, fight over three propositions the union landed on the ballot in the 2018 midterms.

In the end, San Antonio voters approved one measure limiting pay and tenure for future city managers — a swipe at then-manager Sheryl Sculley, the union's key nemesis. Voters also approved a second proposition that let the union unilaterally move contract talks into arbitration, which it did this summer.
Don't expect to hear either side continuing its saber rattling during arbitration, however. The panel ordered both participants not to communicate outside of the negotiation process.