The number of people experiencing unsheltered chronic homelessness in San Antonio is up 4.5% since 2020. 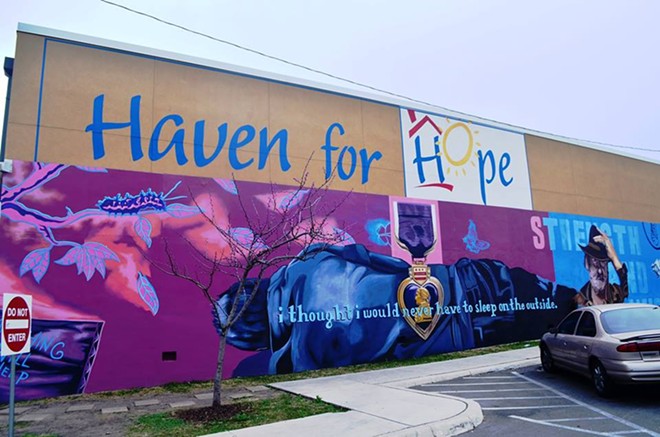 Facebook / Haven for Hope
A few displaced camp tenants made their way to homeless shelter Haven for Hope.
City workers cleared a sprawling homeless encampment at the Interstate 37 underpass at Brooklyn Avenue on Thursday morning to make way for future development, according to media reports.

The belongings of 25 to 100 people were swept up and driven away in trucks as workers erected wrought-iron fencing around the former campsite, the Express-News reports.

A portion of the cleared tract, owned by the Texas Department of Transportation, is slated to be leased out to an unnamed developer, according to the daily.

Terri Behling, communications director for homeless shelter Haven for Hope, told the Current that a few displaced camp tenants have since made their way to her facility, located blocks from the underpass.

Haven for Hope has seen an increased demand for emergency housing over the past few months, Behling said. While the shelter is full, those displaced from the camp and families facing homeless always have a spot, she added.

"While we don't have all the data as to what is leading to [the increased demand], we know that since the eviction moratoriums that were in place during COVID expired we've seen an increase in people seeking services," she said.

Behling also said rising rates and inflation, which stood at 8.5% last month, are driving up demand for space in the shelter.

"It's important for people to realize that every individual coming to seek services at Haven for Hope has a different story and a different reason why they are experiencing homelessness," she said.

The Brooklyn Avenue encampment — one of San Antonio's largest — has been cleared several times since 2020, according to Behling. While it's unclear whether the area will permanently closed off, the Express-News reports that the city has erected no trespassing signs.