Castillo said the city now should work to adequately fund Metro Health and ask abortion-access nonprofits what help they need. 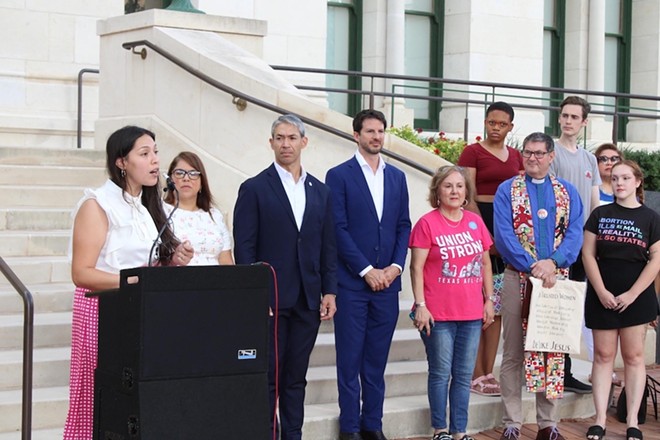 Her office penned the resolution, modeled after a similar measure passed by Austin's city council. What's more, she worked with Mayor Ron Nirenberg's office and city staff to bolster the language in the resolution and helped secure majority support on council for its passage.

At its heart, the resolution — passed over strenuous objection from anti-abortion groups — guides local officials not to use city funds to collect and share information on abortion services to agencies that would use them in criminal investigations.

While the resolution passed with sweeping council support, District 8 Councilman Manny Peláez voted "no," saying it was merely symbolic. Some abortion-rights advocates also questioned whether it went far enough to constrain police use of city funds for abortion-related investigations.

We caught up with Castillo by phone to discuss those objections and to ask where she wants to see city go next in protecting abortion access.

A lot of Tuesday's debate among council centered around whether the resolution had teeth and was anything more than symbolic. Talk about why, despite those criticisms, you felt urgency to get it passed.

With the overturning of Roe v. Wade, our office, as well as many others, received an outpour of concern, worry and fear about the criminalization of women accessing their right to healthcare — meaning access to safe abortion. And we began drafting a resolution, because it's important that women in the city of San Antonio, or those who can carry a child, know that as a city and city council, that we will not prioritize allocating funding towards policing women for taking care of their reproductive health needs. I challenge the idea that this is only symbolic, in that when we look at past resolutions, whether it's [against book bans] or for pay parity, that we follow these resolutions with action. And I think it's important to highlight now, with the passage of the resolution, that we're directing the city staff to deprioritize funding for criminalizing women. Right? So, what that means, for example: are we going to see a PD unit to go arrest women who have had an abortion or those performing the abortions? No. Why? Because with the passage of this resolution, we've provided city staff with the vision of our city council to deprioritize criminalizing women for accessing healthcare.

Some abortion-rights activists wanted to see this go further. They wanted to see something that echoes the language in Austin's resolution and says that SAPD would make this kind of investigation its lowest priority. Why wasn't that in the resolution?

When we look at Section Three of the resolution, you see that it's a policy recommendation that the city council ... that we're saying that we're not going to collect, store, catalog or report any abortion, miscarriage or other reproductive healthcare acts strictly for the purpose of pursuing a criminal investigation. And we are also recognizing that we are not operating under the same charter as Austin. Essentially, when you dive into Section Three, with the passage of this, we are directing the city with a vision that calls for us to deprioritize criminalizing women who have accessed healthcare.

We know Bexar County DA Joe Gonzales isn't interested in pursuing abortion-related charges except in the most extreme cases. He's been public about that. Have you had conversations with Chief William McManus to understand where he sees the San Antonio Police Department fitting in on this?

We've had conversations with city staff regarding that authority and on the city charter restrictions on how the city council cannot direct the chief on which crimes to prioritize. And that's what the conversations have primarily been.

In your comments at Tuesday's meeting, you suggested this resolution could be just the beginning and that you'd like to see additional resolutions or ordinances protecting abortion access. What else would you like to see?

A way that we can continue to support women's access to reproductive healthcare is by ensuring that we're adequately funding Metro Health, whether it comes to resources like contraceptives and/or testing — ensuring that we continue to invest in Metro Health. When we look to other cities like Austin, we see that they do have an abortion fund, and what that looks like is investing in [Austin's municipal health system] to provide and connect women to reproductive healthcare. So, there are opportunities for us to tangibly support women, whether it's through a budget ask, or if you look to the City of Seattle, who created a sanctuary city for women who have received an abortion or those who have performed an abortion. So, there are a number of things I look forward to in conversations and on the legislative agenda. I'm pleased to hear that the [co-]chair of the [Intergovernmental Relations] Committee, [Manny Peláez], committed for stronger protections. And I'm excited to see that he's going to prioritize and agendize reproductive priorities within the IGR committee.

Do you think San Antonio could go as far as setting up a fund for women who need to leave the state to obtain abortion care?

I think we could continue to support and have conversations with Metro Health and ... nonprofit organizations and ask them [about] the support that they believe they need. We need to ensure that we're asking the folks who are performing and doing the work how we can best support them, rather than us coming forward to them with a plan. So, I think we need to have a larger conversation with nonprofit organizations — whether it's Buckle Bunnies or a delegate agency of the city — on how we can best support them and the ways in which they support women and their access to healthcare.

Are you already trying to get some of those meetings together?