He still faces trial over charges that FBI agents found marijuana, psychedelic mushrooms and a firearm at his Alamo City residence. 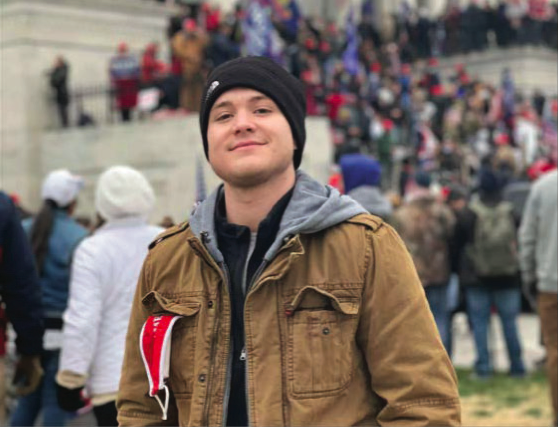 FBI
San Antonio resident Chance Uptmore posted this photo on social media that the FBI says places him at the January 6 Capitol coup attempt.
Yet another San Antonio-area resident has copped a plea related to the Jan. 6 Capitol insurrection.

Chance Anthony Uptmore pleaded guilty to illegally parading, demonstrating or picketing in the Capitol, one of four federal offenses with which he'd been charged, the Express-News reports. The 25-year-old and his father surrendered to the FBI early last year to face charges related to their alleged involvement in the riot.

As part of the younger Uptmore's plea deal, the feds agreed to dismiss the three other charges against him, the daily reports. The remaining charge carries a penalty of up to six months in jail plus possible probation.

However, he still faces trial in Texas next week over charges that FBI agents found marijuana, psychedelic mushrooms and a firearm at his Alamo City residence during a raid related tied to the Jan. 6 case, according to the Express-News.