The business owner's TikTok video led some to falsely accuse a local dancer. 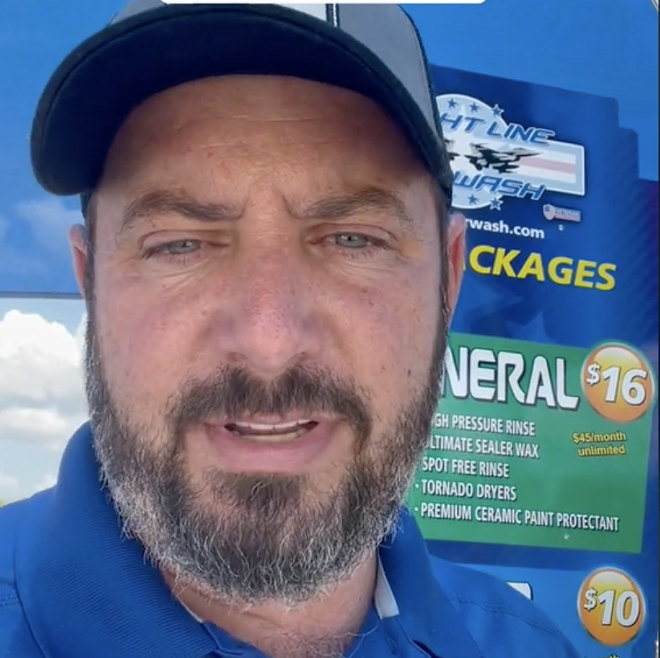 TikTok / @denisbrown185
Denis Brown, owner of the Flight Line Car Wash, issued an apology to April Martinez, who some falsely accused of robbing Brown's business.
A San Antonio business owner who rose to TikTok fame for venting about his burglarized carwash found himself in hot water after social media users accused him of slandering a local nightclub dancer.

Denis Brown, the owner of Flight Line Car Wash near Stone Oak, and the woman have since made amends and are now planning to hold a joint fundraiser at the business next month.

In a series of TikTok clips, Brown asked for the public's help in identifying thieves allegedly caught on camera burglarizing his business earlier this week. On Thursday, he announced in a video that the thieves had been identified.

"If you enjoy dancing in the bar and your name is a month, we're on to ya," Brown said in the TikTok update. "I'd make myself present."

However, some social media users then accused a local dancer April Martinez — colloquially known as La Chiquitita — of being the suspect. After all, her name is a month, and she dances at bars.

In Facebook livestream, Martinez said she received harassing messages from people accusing her of being the person caught on video around the time of the Flight Line Car Wash heist.

Brown was later forced to issue yet another TikTok update, informing his followers that Martinez didn't commit the crime.

"I never called out April Martinez, who happens to be a dancer in San Antonio," Brown said during yet another TikTok clip, this one posted Thursday evening. "Do you know how many Aprils there are in San Antonio that happen to dance?"

As of Friday, the true suspects still haven't turned themselves in, according to Brown. That means he plans to pursue charges against the individuals.

Brown and Martinez have since made amends over the confusion created by social media sleuths. He now says the pair will jointly host a charity fundraiser at Flight Line on August 6.

Brown told the Current that the whole fiasco has been a learning experience about the power — both good and bad — of social media.

"There's a lot of people that go to a club and party. I never said the suspect's name was April; it never originated from me, not from the police," Brown told the Current. "You can't control what people are gonna say on [social media]."

The Flight Line is still running a $5 wash special until Monday to celebrate the suspects being swiftly identified.