Women's Global Connection / Facebook
On Thursday, Sister Jean Durel of San Antonio's Sisters of Charity of the Incarnate Word was arrested alongside approximately 70 other people who occupied the rotunda of the Russell Senate Office Building to protest family separation and the detention of immigrant children at the border.

After a prayer service on the lawn of the U.S. Capitol, Durel and a group of protesters moved into the building, where some people laid on the floor in the shape of a cross wearing photos of children who died while in U.S. custody. When the group refused to leave the premises, they were arrested for the misdemeanor charge of crowding and obstructing. 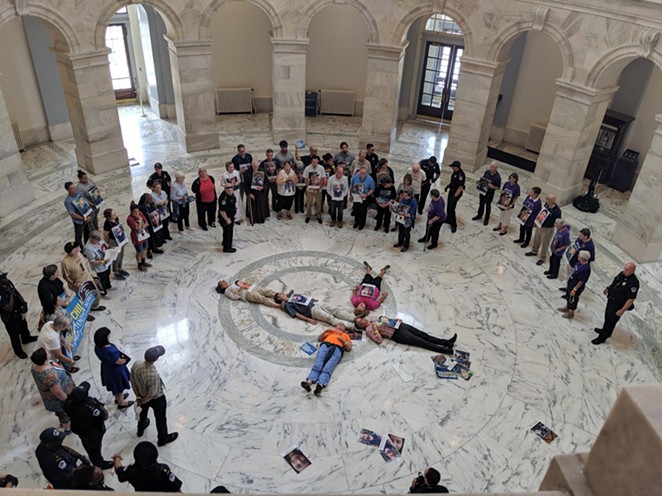 Women's Global Connection / Facebook
The protest was part of the Catholic Day of Action, a national day of nonviolent civil disobedience in protest of the overcrowded detention camps — or, as some would say, concentration camps — the Trump administration has filled with migrants trying to enter the country to seek asylum.

Sister Martha Ann Kirk, who teaches at the University of the Incarnate Word, told the Express-News that the protest was both to draw attention to the issue as well as put pressure on lawmakers.

“We want people to pay attention to this.... It does not help any of us to traumatize children," she said. "Humanity knows you need to take care of children, you need to protect them.”