The arbitrator who returned the officer to the job heard the case under the police union's prior bargaining agreement. 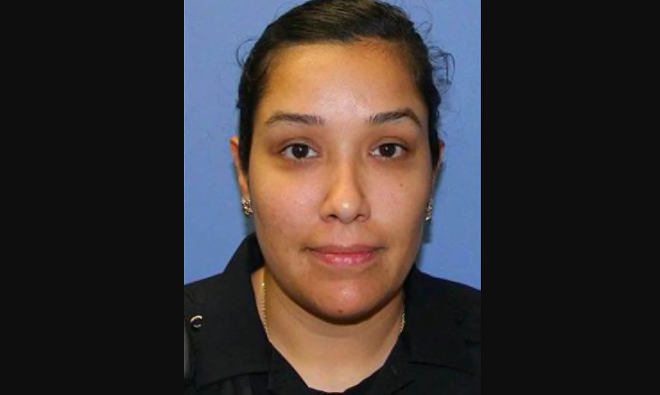 SAPD
An arbitrator has returned Officer Elizabeth Montoya, an eight-year force veteran, to her job.
A San Antonio cop fired in 2019 after dashcam footage showed her repeatedly punch a handcuffed pregnant woman in the head now has her job back, KSAT reports.

A third-party arbitrator returned Officer Elizabeth Montoya to the San Antonio Police Department after the eight-year force veteran testified during a March hearing that the seven punches she dealt were "compliance strikes," according to the station. Her termination was slashed to a 45-day suspension.

During testimony, Montoya said she was afraid she was "going to either get spit on or head-butted” as she conducted a drug search of Kimberly Esparza, then six months pregnant, KSAT reports. In addition to striking Esparza, Montoya also left her on the ground in heavy rain for 26 minutes, according to documents cited by the station.

In a statement provided to KSAT, San Antonio City Attorney Andy Segovia said he was "disappointed" with the arbitrator's decision, adding that Montoya's conduct "was not in keeping with the standards established by SAPD."

Segovia also said the arbitrator heard the case under the police union's prior collective bargaining agreement. The new agreement, approved by city council in May, "places proper weight to the Chief’s discipline decisions and limits the arbitrator’s subjective determination that the imposed discipline was excessive," he added.

Before approval of the new labor contract, police-accountability advocates argued that a skewed arbitration process led to San Antonio having  one of the highest rates of problem officers being allowed to return to the force.