During the March primary, more than 12% of the state's mail-in ballots were thrown out due to new restrictions imposed by the bill. 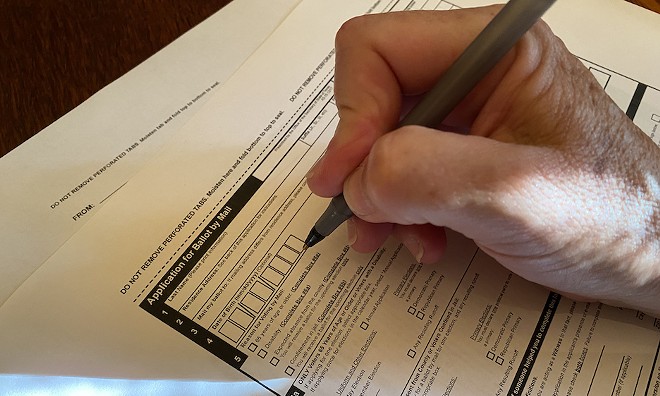 Sanford Nowlin
Under Texas' Republican-authored voting legislation, people who apply to vote by mail can have their applications rejected if they incorrectly remember which kind of ID number the state already has on file for them.
A coalition of civil-rights groups, community leaders and elected officials have a Juneteenth warning: Texas' new election law is making it harder for people to vote by mail.

During a Sunday event at the Roseville Senior Apartment Complex, Bexar County Commissioner Tommy Calvert  and other members of the local Juneteenth Coalition warned that the Republican-backed Senate Bill 1 has already led to a spike in ballot rejections.

During the March primary, more than 12% of the state's mail-in ballots were thrown out due to new restrictions imposed by the bill, according to a Texas Tribune analysis. That's up from a 1% rejection rate in the 2020 presidential election.

Voting-rights groups say provisions in the measure are confusing and meant to dilute the number of ballots cast by likely Democratic voters. Under Texas' strict rules, voting by mail is largely limited to people 65 and older and those with disabilities.

According to Calvert's office, 37% of Southeast San Antonio residents who applied to  vote by mail had their ballots rejected in advance of the March primaries, for example. Emma Guerrero, the mother of former District 3 City of San Antonio Councilwoman Debra Guerrero, was among those unable to vote due to a rejection.

“I tried three times to request my mail ballot application with no success,” 64-year-old Bexar County resident JoAnn Cardenas said in a statement. “After sending two applications, I was told neither of the applications were received. I triple-checked the application, and my provider double-checked it. We called the day before the election, and I was again told my ballot was not received.”

The new law requires voters who apply for mail-in ballots to provide either a driver's license or Social Security number that matches the number they gave when first registering to vote.  Many had their applications rejected because they couldn't remember which form of ID they supplied.

Others had their ballots rejected because thy didn't see designated space to write their ID number on envelope’s flap.

During the Sunday gathering, Juneteenth Coalition members urged families to help at-risk voters obtain and correctly return their mail-in ballots. They also urged voters to check to make sure the return address for mail ballot applications is the Bexar County Elections Department, not the County Clerk.