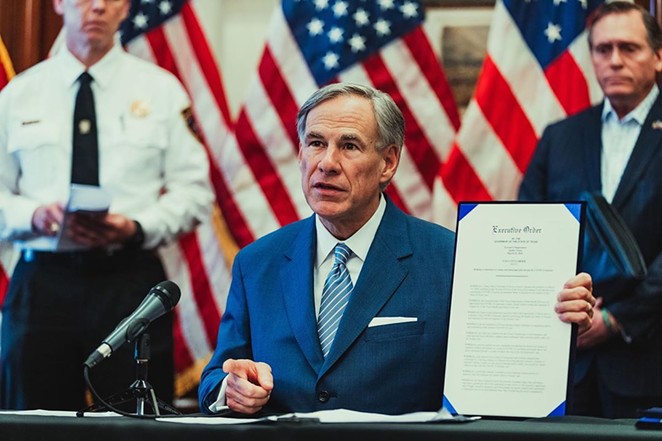 Instagram / @governorabbott
Texas Gov. Greg Abbott shows off an order signed during the coronavirus pandemic.
When Gov. Greg Abbott unveiled his plan to reopen retail businesses and restaurants across the state, media coverage was largely tempered with caution, some with a healthy dose of skepticism.

Not so for San Antonio Fox affiliate KABB-TV.

"Let's go the MALL everybody," the station posted on its Facebook page without irony as it linked a story on Texas shopping centers reopening. To further get the point across, the poster even followed up the sentiment with three smiley emoticons.

The story itself reported that Simon Property Group — owner of SA's Ingram Park Mall and the San Marcos Premium Outlet — plans to reopen those shopping centers as well as other properties around the state.

Although the brief article mentions restrictions will be in place to ensure occupancy "doesn't exceed one person per 50 square feet," it offers no context for the controversy surrounding Abbott's order. Nor does it touch on public health experts' warnings about the potential danger of gathering in retail spaces before the coronavirus pandemic peaks.

Of course, news cycles are brisk, and the post could have been an innocent gaffe by an overworked intern.

However, the track record of KABB's owner, Sinclair Broadcasting, gives reason for pause. Sinclair — which also owns San Antonio's WOAI-TV and KMYS-TV — has a decades-long track record of mixing far-right propaganda with its news content.

Remember the scary scripted screeds that news anchors at nearly 200 local stations read in 2018 in lockstep with President Donald Trump's "fake news" Twitter meltdowns? That was ordered up by Sinclair.

Whether the "Let's go to the mall" post was an innocent mistake or an attempt to pat Abbott on the back as he joins other other GOP governors in rushing to reopen their economies, it's hard to imagine the post would pass the smell test with any editor serious about journalistic ethics.