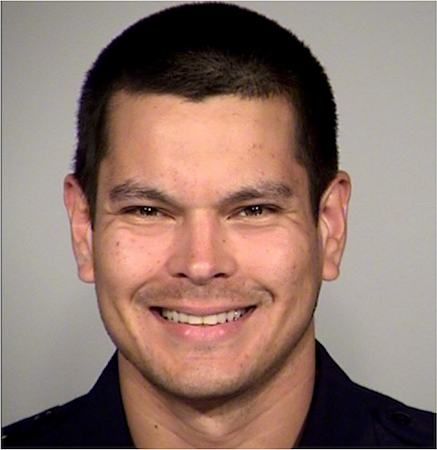 San Antonio Police Department
Remember the cop who handed a sandwich smeared with dog poo to a homeless man? He managed to fight his firing in arbitration.
The San Antonio bike cop who made headlines for giving a homeless man a feces-filled sandwich is trying to overturn a second suspension in an arbitration hearing that started Monday.

SAPD Officer Matthew Luckhurst won reinstatement last March after being canned over the sandwich incident. In that case, an arbitrator rejected the firing on a technicality.

The disciplinary action Luckhurst is now fighting is nearly as shitty: He and a coworker are accused of leaving an un-flushed dump in the women's locker room and smearing a brown substance over the toilet seat after a female officer requested the restroom be kept tidy.

Officer Jessica Medrano testified Monday she was eight months pregnant when she discovered Luckhurt's prank and that it made her physically ill, KSAT-TV reports.

“It’s led to mistrust between the citizens of San Antonio and our department, that our officers have had to answer for his actions,” Medrano reportedly said during the hearing.

Under the city's collective bargaining agreement with its police union, officers are guaranteed the right to appeal their terminations through a hearing with a third-party arbitrator.

According to city records obtained by the Current, 27 of the 40 officers terminated between 2010 and 2019 — or roughly two-thirds — were allowed to return to duty after arbitration.

Luckhurst's hearing is expected to continue through Thursday.