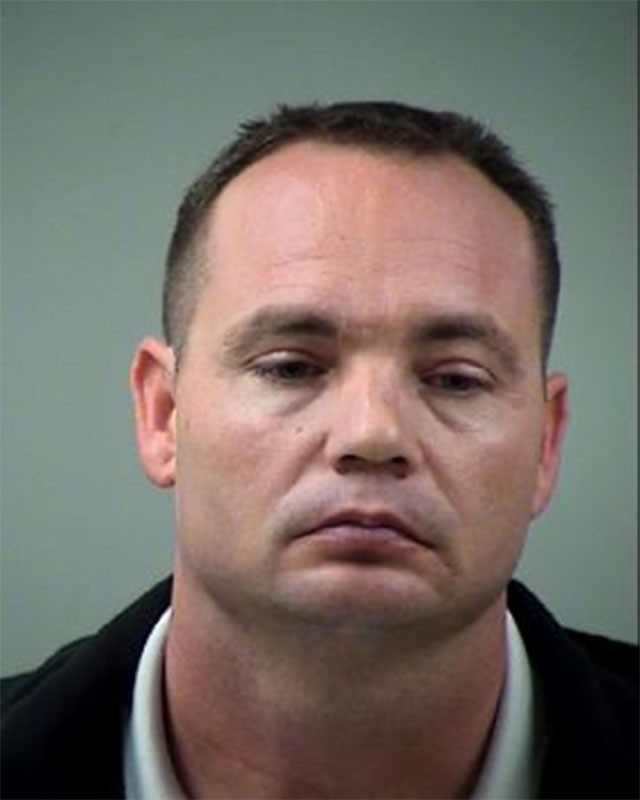 On Friday, November 22, San Antonio Police Officer Jackie Len Neal handcuffed a young woman, allegedly placed his hand inside her blouse and began groping her breasts, according to a police report. After pulling the woman over for suspected auto theft (although SAPD has yet to confirm the car was stolen, the San Antonio Express-News reported) the 40-year-old white male then took the woman to the back of his police car and raped her, instructing her not to tell anyone.

This isn’t the first sexual assault accusation Neal has faced—a woman made a similar sexual violation complaint against Neal a few years ago. Because the woman didn’t cooperate in the police investigation, it was dropped and Neal saw no penalty. Along the lines of sexual misconduct, Neal dated an 18-year-old member of the department’s Police Explorer program two years ago. He received a three-day suspension in September but was reportedly transferred to the night shift following the incident. Neal was arrested on charges of felony sexual assault for his latest offense, and eventually released on $20,000 bond.

As an isolated incident, Neal’s case is worrisome but moreover, his dismal track record of alleged and documented sexual misconduct reflects a troubling systemic pattern within SAPD culture. As the Current extensively reported back in 2010, SAPD has received a disturbingly high number of sexual misconduct complaints within a system that is said to be unfriendly to alleged victims and equipped with vague tracking for this type of misconduct and thus, accountability, of these violations—making the accusations against Neal not only a heinous act if proven guilty, but a solemn reminder these widespread, institutional problems likely persist.

SAPD public information officers could not comment on further details of the accusation, as the criminal investigation was ongoing as of press time. In an e-mailed statement, Police Chief William McManus said, “This conduct is unthinkable and I’m absolutely outraged. Once we became aware of the allegation, we took prompt action. A high standard of conduct is a priority of the SAPD. I praise the victim for having the courage to come forward and having the confidence in the SAPD to handle the case effectively.”

However, a community-based evaluation of SAPD policies and practice by the Police Executive Research Forum, released in May 2008, detailed several procedural obstacles for these complainants, including accessibility and transparency. The PERF recommended a series of departmental reforms, including an independent review of SAPD.

“At the time, we were dealing with what I would call, an internal affairs department that was out of control,” University of Texas at San Antonio Professor Mario Salas, part of the San Antonio Coalition for Civil and Human Rights and former PERF member, told the Current. Salas pointed to intimidating complaint report practices, such as a provision stating the alleged victim could be liable for felony perjury when giving a statement of the offense, not receiving a copy of the complaint itself and not being able to bring anyone to the advisory action board hearing with them—for either legal reasons or moral support—one of Salas’ “biggest points of contention,” while studying the issue.

While they can now be accompanied by someone (at the approval of the chairman of the advisory action board), the complainants are still not given a copy of their complaint and the aggravated perjury warning remains on formal complaint acceptance forms, said SAPD spokesperson Sandy Gutierrez.

The department, and Deputy City Manager Erik Walsh (who oversees SAPD), did not respond to further questions about the PERF recommendations and other efforts to reform SAPD’s handling of sexual misconduct allegations.

It’s not just the complaint process that has spurred criticism—there’s the perceived lack of action taken when alleged (albeit lesser) offenses occur. A 2011 Texas Civil Rights Project report concluded that, “SAPD suffers from a systemic lack of supervision and accountability that allows serious incidents of misconduct to arise.” Further, it found that while officers were ultimately indefinitely suspended and, in some cases, faced criminal charges, in most instances they were not first-time offenders. “Rather, it took an egregious incident to get SAPD’s attention,” the report noted. The authors proposed a heavier investment in early intervention systems–by taking proactive steps before an employee gets into serious trouble, at least, fewer citizens will be affected by his or her misconduct, they write.

“The Chief didn’t hold supervisors responsible for identifying early warning signals of officers that might have problems and hold them accountable,” said James Harrington, a human rights attorney and founder/director of the Texas Civil Rights Project, in an interview with the Current. While McManus says that the department took “prompt action” when the allegations arose, Harrington questions why Neal’s past activity didn’t merit increased scrutiny of the officer to begin with.

“When you see these characteristics, these signs of aggression—that might not be as serious, of course, as rape—they should still set off a signal, a flag that there is something wrong with this guy and you got to take him aside and work with him on this stuff or get rid of him … I mean, you don’t out of the clear blue sky go rape somebody.”

When Harrington learned of Neal’s alleged offense, he immediately drew a parallel with the case of Officer Craig Nash. In 2010, Nash allegedly handcuffed and transported a transgendered woman to a secluded area, where he then forced her to give him oral sex and raped her. While SAPD arrested Nash shortly thereafter, the officer exhibited similar early indicators well before the incident, said Harrington. In 2009 Harrington himself co-filed a complaint that Nash demonstrated “rough and inappropriate treatment” of a domestic-violence victim. The department failed to investigate the complaint.

“There was clear conduct that this cop was off balance,” said Harrington, who made the complaint after his son heard the victim’s screams from a hotel room, called Nash and received aggression on the other end. “When I heard about Neal I said, ‘you’ll probably find the same thing—warning signs.’”

An ambiguous complaint classification system exacerbates the early intervention and accountability problems, say advocates of SAPD reform. A 2011 SAPD Internal Affairs Report (the most recent year available), that tracks complaints from citizens against SAPD officers, lists 334 formal cases investigated on 284 officers, an increase in caseload from the 280 cases on 361 officers documented by the department in 2010. But it’s difficult to discern which investigations arise from sexual offenses, as sexual misconduct is not separated into its own category, despite the parsing out of detailed subsection rule violations like “court dress codes.” Instead, it falls under the umbrella of an officer’s “conduct and behavior” which was called into question some 66 times in 2011, surpassing all other alleged violations. (The second highest was application of force at 46 times.)

SAPD’s Gutierrez says sexual misconduct is not limited to this category and depends on what the allegation entails. For instance, it can fall under “consorting with persons of ill repute” meaning a prostitute or felon; this category only received a single complaint in 2011.

As for the punishment, Neal is innocent until proven guilty, but those who have examined SAPD policies argue the continuation of his paid leave salary—which SAPD say “follows procedure”—is not only over-the-top, but sets troubling precedent for future possible offenders.

“I think it ought to depend on the severity of the charge; with something like this you should not be getting paid,” said Salas. “If you curse someone out, OK, it’s a lighter thing, but raping someone? I don’t think he should get a dime until this thing is settled.”

Harrington suggested cutting the officer’s salary in half or allotting back pay if he is eventually vindicated—if his compensation isn’t curbed at all, he said, SAPD signals they don’t take these allegations seriously, regardless of what claims they make publicly.

“It sends the message that it’s OK—‘I won’t have to work and I’ll still get paid’—there has to be some kind of punishment that the other cops can see,” Harrington said. “They just don’t do a very good job of [reprimanding sexual misconduct] and I think part of the reason is that they get away with it.”